COLLEGE PARK – More owners are surrendering their pit bulls to shelters, which are struggling to adopt the dogs out since the Maryland Court of Appeals ruled purebred pit bulls “inherently dangerous,” and decided property owners also are liable for pit-bull-related incidents.

Maryland is the first state to implement third-party strict liability for a specific dog breed, and the only one that currently declares pit bulls dangerous statewide.

The suit challenges the law’s constitutionality and enforceability because, he said, it violates residents’ 14th Amendment due process property rights and fails to define “pit bull” or “pit bull mix.”

Almost immediately after the court ruling, Armistead Homes Corp. required all residents to get rid of their pit bulls and pit bull mixes or be evicted, Edwards said.

Although the initial April ruling was amended in August to exclude pit bull mixes, “it comes down to what is a mix, what is this, what is that?” Edwards said. “You don’t know. It’s undefined.”

Other Maryland residents, concerned their landlords will change their leases to ban pit bulls and pit bull mixes because of the ruling, have already contacted the Humane Society’s helpline with questions, Theisen said.

Joe Mayer rents a house in Annapolis with his pit bull, Princess. For now, his landlord hasn’t asked him to get rid of Princess, but he worries about finding a place that takes pit bulls when his lease ends.

The adoption rate at Jasmine’s House Inc., a Maryland-based pit bull and pit bull mix rescue that opened in 2010, has dropped, while the number of surrendered pit bulls has jumped two-thirds, said Heather Cole, the rescue’s adoption and foster care coordinator. Before the ruling, the rescue averaged one adoption per week, but now up to three weeks will go by without adoption requests.

Jasmine’s House is trying to adopt pit bulls from overcrowded Maryland shelters out to homes in Pennsylvania and West Virginia, where landlords cannot be held liable for pit bull attacks, Cole said. The rescue is also reaching out to more pit bull “foster parents,” people who take dogs in temporarily until they’re adopted.

The SPCA of Anne Arundel County doesn’t DNA test dogs, but at least a quarter of those now at the shelter are considered pit bulls or pit bull mixes, said SPCA volunteer coordinator Kim Teter. Most of them are longer-term residents.

Mali, a 2-year-old pit-bull mix, has been at the shelter since Christmas.

Callers to the Humane Society hotline are reminded the ruling does not include pit bull mixes, Theisen said, and urged to get breed documentation for their dogs since “pit bull” is a generic term, and “there really is no such thing as a true pit bull.”

However, canine DNA testing is “notorious for being incorrect,” said Edwards, Weigel’s attorney. It’s much more complex than DNA testing a human, which makes defining a pit bull an “I-know-it-if-I-see-it issue.”

Theisen said the ruling is unsound because “it falls to a property manager to determine from physical appearance what a dog’s genetic history is.”

Helpline callers are also advised to get their dogs behaviorally assessed, Theisen said, and, ideally, should introduce them to their landlords to show they don’t pose a threat.

Behavior assessment should be based on the individual dog, not the breed, she said. “All breeds bite.”

For the first time, the SPCA created Pit Bull Appreciation Month, in which pit bulls and pit bull mixes are 50 percent off in September.

The sale may help break stereotypes and encourage adoption by getting people to consider dogs they may not have even looked at before, Teter said.

Theisen said she hopes shelters will refer pit bull foster parents and adopters to the helpline with any concerns about having a pit bull in Maryland. 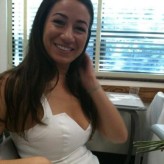 Sophie Petit is a graduate student at University of Maryland’s Philip Merrill College of Journalism and has freelanced for her hometown newspaper, The Capital, for the past year in Annapolis. She graduated from College of Charleston in South Carolina with a bachelor’s degree in communications.