Billy Barnhard’s father taught him how to hit at 3 by pitching plastic baseballs to him in the basement. Barnhard played baseball until he was 7.

That’s when he started having trouble speaking, and moving his limbs properly. Doctors eventually diagnosed him with a disorder called generalized dystonia. Barnhard, now 18, can no longer speak and is forced to use technology, specifically his iPad, to communicate.

But thanks to a 2008 Maryland law requiring schools to offer athletic opportunities for students with disabilities, Barnhard, a senior at Oakdale High School in Frederick County, started competing again three years ago when he joined a new program called unified sports.

Recently, the Department of Education announced a similar national directive requiring schools to give equal opportunities in sports to students with special needs, meaning thousands of kids across the country could soon join Barnhard.

Although Barnhard said “it wasn’t hard” to quit playing sports as a kid, he is glad unified sports, which pairs disabled students with general education students, has come into his life. He said the program helped him make a lot of friends and “to be active.”

Barnhard’s father, Brian Barnhard, said he hadn’t heard about the Department of Education directive, but said it is a great thing to have put in place.

The announcement has drawn comparisons to Title IX, which President Richard Nixon signed into law in 1972. Title IX required schools to give fair and equal opportunities to young women who want to participate in athletics.

Since Title IX was put in place, the number of young women participating in sports at the high school level has increased to more than three million, according to a speech by U.S Secretary of Education Arne Duncan last year.

Barnhard’s father, who previously was an official in unified sports, said the rules in the sports are more relaxed, so the special education students get a better chance to succeed.

With more than 25 kids on the Oakdale team, and more than 200 kids in the unified sports program in Maryland, the state is ahead of the curve, Barnhard’s father said.

“I’m shocked by how much it’s grown. When I came here there was like 10 kids who showed up. Now it seems like every school in Maryland has a team and there are 20 to 30 kids on it,” Barnhard’s father said. He added that the state tournament last year had to be played at five different locations.

Barnhard is excelling in the program that brought sports back into his life. He won the state championship with his partner in tennis last year, and has a banner with his name on it hanging from the tennis court during the season.

Barnhard is also no slouch at bocce ball, an Italian sport, much like curling, but played on a court and not ice, as he and his partner finished in second in the state two years ago. Because his disorder restricts him from running much, Barnhard is constrained to only throwing the javelin during the track season.

Nearly a year ago, just after Barnhard won his state championship, the disease got worse and nearly forced him to quit sports again. He lost his ability to eat food, and doctors wondered if the disease would ever stop getting worse. He missed much of the school year and wasn’t able to compete.

Dystonia is a neurological disorder, much like ALS, that causes abnormal posturing and twisting of particular body parts. Unlike ALS, dystonia is not fatal and the disease stops spreading through the body in most cases. There is no cure.

Barnhard is forced to eat through a feeding tube for the rest of his life, but thanks to doctors he can now continue unified sports, and his family is relieved that the disease appears to have stopped getting worse.

Barnhard’s family is very thankful for the unified sports program and what it has done for their son.

“It’s a great program and helps a lot of kids. It helps to get him out of the house and do things other than video games,” Barnhard’s father said.

“If I was him I would be depressed every minute of the day, but it doesn’t seem to affect him as much,” he added of his son, who spends much of his day smiling and laughing.

Barnhard said he tries not to let the challenges get him down. He just tries to take them and deal with them one day at a time.

Barnhard was one of the team’s selections for the state and county bocce ball tournaments beginning Thursday. After a second place finish two years ago, and his absence because of his disorder last year, this time around, Barnhard said, he is going to win the tournament. 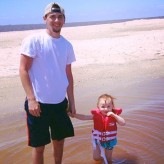