WASHINGTON — The nation’s capital has long been known as a place full of stuffy gray suits and neatly pressed ties, but these days, designers are loosening the top button.

“There has been a stigma with D.C. fashion,” said Michelle Gibson, a fashion designer and Howard University senior. “It’s gray, tacky and uninspiring.”

That stiff image is being erased by a confluence of forces that are putting D.C. on the fashion map: Up-and-coming, home-grown designers, showcase venues in DC Fashion Week and the DC Fashion Incubator, plus a young, hungry, well-heeled consumer market.

Gibson is a prime example. She’s one of a handful of students at Howard to have started their own clothing line as a college student. Hers is called “Simply L3ve,” and she showcased her collection at DC Fashion Week’s Emerging Designers Showcase in February.

Gibson traces her fashion aspirations back to when she had to wear a uniform for school. Her peers all had to wear the same, bland uniform, but she noticed how each made subtle adjustments to make those costumes their own.

“I was a quiet observer,” she said.

This was the inspiration for Simply L3ve — a customizable clothing line that allows her customers the creative freedom to create their personal style.

To Gibson, personal style is about being able to take a template and add colors and prints of the wearer’s choosing.

“I want my customers to wear something no one else has,” said Gibson.

That’s exactly the DC fashion vibe, said Janice Wallace, editor-in-chief of Façon Magazine, who has lived in the Washington area her whole life. She founded Façon Magazine in November 2011 to showcase local designers.

“It’s about people who do their own thing and don’t need to look like anybody else.” Wallace said.

This characteristic of fashion in the Washington metropolitan area provides greater opportunities for young designers, she said.

To Wallace, D.C. has always been stylish, but now more people are paying attention.

“Before, if it didn’t appear in The (Washington) Post, it didn’t happen at all.” she said.

“You would think this kind of information is always available but it’s not,” said Holly Thomas, editor in chief of Refinery29 D.C. “Bloggers have created a more comfortable environment for people interested in fashion.”

Nurturing this nascent fashion industry is the area’s own showcase: DC Fashion Week, the fifth- largest fashion week in the United States. Historically, it has brought in designers from all over the world, but lately it’s been courting designers from around the nation’s capital. The weeklong event helps designers get exposure in front of big-name buyers, who might then agree to carry their line.

The DC Fashion Incubator and Style Studies DC also are helping to build the area’s fashion scene by working with emerging designers to assist them with their brands and network with potential buyers.

Macy’s has partnered with the DC Fashion Incubator to give up-and-coming designers the opportunity to sell their line at the company’s Metro Center store. Talks for this partnership began in October 2012 and are expected to be put into action in the next year. Macy’s has created partnerships for similar programs in Chicago, Philadelphia and San Francisco.

Wallace works with the DC Fashion Incubator and says she is “optimistic” about the future of the organization’s partnership with the Metro Center Macy’s.

Style Studies DC was founded in February by 22-year-old Kiah Leigh Rhode, from Bowie, to bring together influential members of the fashion industry and young people interested in fashion. The program is still under construction and held its first series of seminars earlier this month. These seminars were led by players in the local fashion scene, like Wallace, and attended by young people interested in becoming designers, editorialists and public relations representatives in the fashion industry.

Rhode calls herself a “professional DIYer & creative” and has an eponymous jewelry line.

Rhode says the influx of young people in the D.C. area has helped Washington’s relationship with fashion.

Seven of the 10 wealthiest counties in America are in the Washington metropolitan area, according to the American Community Survey conducted in 2011. The 2010 census found that a third of the population in Washington is between the ages of 20 and 30, a 23 percent increase from the last census.

Retailers are noticing the trend. Established designers, including Kate Spade, Burberry and Michael Kors, have all brought their stores to the area in recent years.

While this is good news for the young shopper, this development, ironically, is making it increasingly difficult for small boutiques and vintage shops to stay in business.

“Every massive chain store is headed our way and smaller stores can’t handle that.” said Thomas.

But young designers like Gibson continue to be optimistic about opportunities available to them: “I used to think about moving to New York but now I’m considering staying in D.C.” 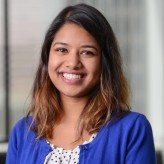