NEW YORK – “It was all sealed like a bottle of lotion.”

The U.S. Customs and Border Protection officer explained that he had just cut open a package apparently shipped from Hong Kong. Inside was what looked like a glass bottle of lotion, but it was stuffed with vials of steroids.

Customs officers, backed by sophisticated scanning machines and highly trained dogs with a nose for narcotics, work 24 hours a day at the United States Postal Service facility at John F. Kennedy International Airport in New York. They are the nation’s first line of defense against fentanyl and other dangerous drugs getting onto American streets.

Exploitation of the international mails is a lesser known side of the U.S. opioid crisis, but government officials say it is a key front in the battle to combat illegal drugs. 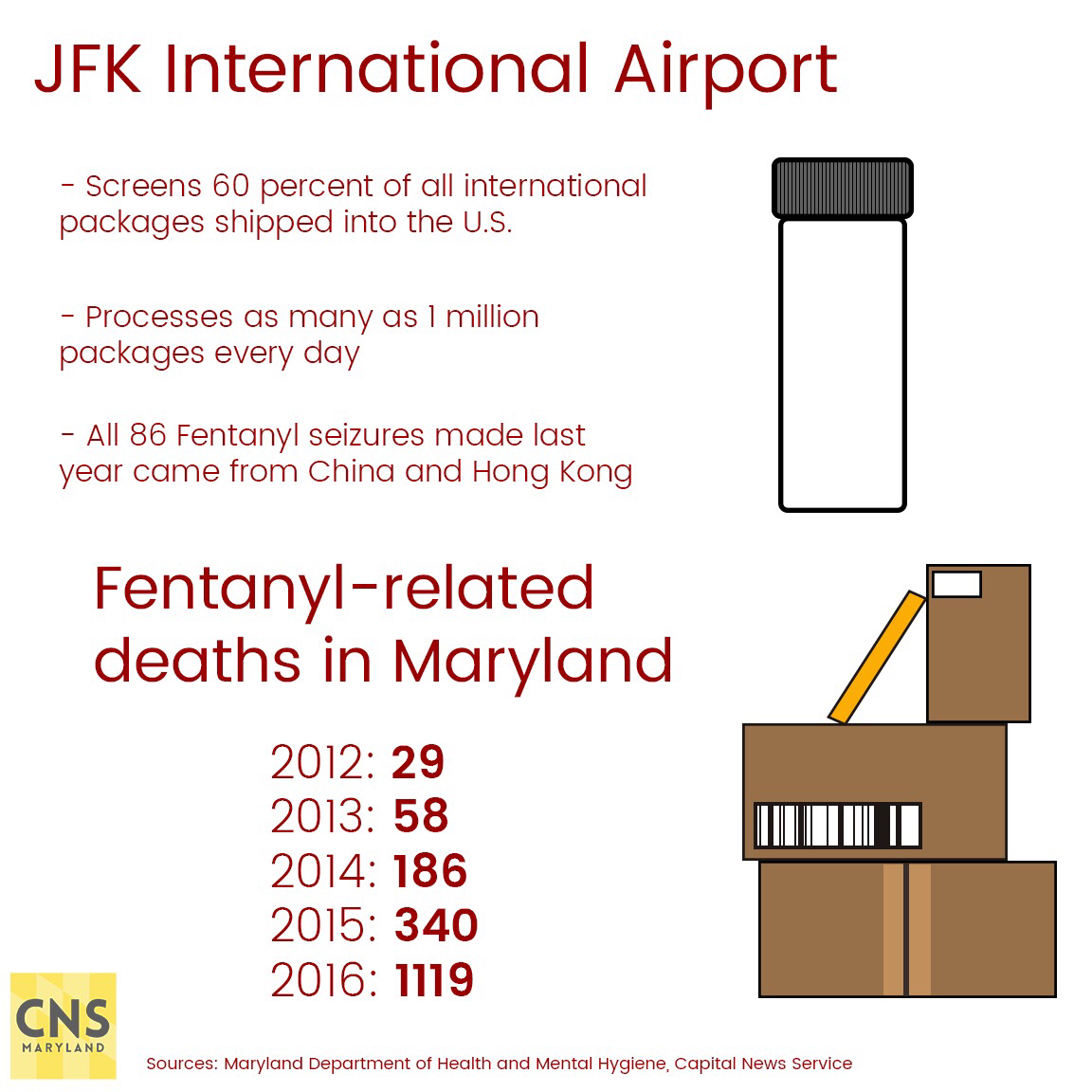 “The opioid crisis is the deadliest drug epidemic in American history and it only continues to worsen,” Rep. Jody Hice, R-Georgia, said during a September hearing of the House Oversight and Government Reform Committee’s government operations subcommittee, which examined the international shipment of fentanyl. “With any drug epidemic, supply reduction is an essential element to drug control.”

Supply reduction is what the mail inspections in New York are all about.

Each day, about a million international packages come through the New York postal facility, where they are screened by customs officers for illicit items. JFK receives 60 percent of the international mail, while the rest is divided among seven other facilities.

“We are permanently stationed at the points of entry,” Frank Russo, New York port director with Customs and Border Protection, told Capital News Service. “That’s our responsibility. We are enforcing on behalf of 40 other federal agencies with over 400 laws. They rely on us to make those seizures, to detain stuff, and when we contact them, we turn it over to them because it’s really under their purview.”

Last year, 275 million parcels of mail were handled by the customs agency, which also screened an additional 98 million parcels from private express couriers like FedEx and UPS.

As of Aug. 27, customs inspectors had seized approximately 82 pounds of fentanyl from incoming international shipments.

Packages are put through an x-ray scan and suspicious packages are placed to the side and opened. If any powders are found, officers are able to use a spectroscopy device called the Gemini, which shines a laser beam through substances to identify the chemicals. The Gemini prevents officers from having to come in direct contact with potentially dangerous substances.

All of the fentanyl seized by customs has come from China. Packages from that nation and other flagged countries are sorted separately and presented to dogs trained to detect narcotics.

“They are a tremendous asset for all of us,” Tyrone Kirkland, a customs enforcement officer, said as his Czech Shepherd, Urbi, trotted back and forth on a conveyor belt, sampling the scents of each package.

Targeting packages before officers handle them can also save a tremendous amount of time.

“If we can target it and we have that advanced information before it even enters the system, then we can stop it,” customs agency spokesman Anthony Bucci said.

The challenge is enormous. Under international treaties, the U.S. Postal Service handles mail from 191 overseas mail agencies. Only a handful so far are using advanced data to help track suspicious shippers.

“We’ve got pilots where we receive advanced data from 18 countries, so we are moving in that direction,“ said Todd Owen, executive assistant commissioner in the office of field operations at customs.

For example, customs officers earlier this year seized a package containing fentanyl that was bound for a domestic address, mailed with an international return address.

With the help of the Postal Service, investigators linked the package and its sender to 450 additional parcels mailed during a five-month span to addresses across the country.

Analysis of additional data revealed that a second international shipper had mailed more than 2,400 parcels between February and June.

“Using data analytics, we were able to turn shipping data from one fentanyl parcel into information about two suspect shippers and more than 2,800 suspicious parcels,” Whitcomb told lawmakers.

Officials say the fentanyl that is being produced in labs in China and ending up in the hands of Americans is very potent: purity levels can be upwards of 90 percent. By contrast, fentanyl seized at land border crossings averages about 7 percent pure.

Fentanyl-related deaths in the United States are at an all-time high and continue to rapidly increase. In Maryland alone, the number of deaths from fentanyl increased by more than 200 percent from 2015 to 2016, according to annual overdose death reports by Maryland Vital Statistics Administration.

Drug traffickers are creative, the New York customs officers said. There isn’t a thing drugs haven’t been hidden in, from kids’ toys to the wheels of a suitcase. It doesn’t take long for officers to spot packages containing potentially illegal substances.

Makers of illegal drugs slightly alter the chemical makeup of fentanyl from time to time, hoping the changed compound will evade detection. Bucci said it can be challenging when a new substance doesn’t match the agency’s catalogue of drugs that the Gemini previously has detected.

“We know it’s something (like) fentanyl but it’s not matching up.” Bucci said. “So we’ll have to send it off to a lab. Our lab will make the determination and then we add that information. The next time that it comes through on our hand-held laser, it’ll come up without delay.”

Speed is essential in lab tests on new drug compounds – any delay can tip off a shipper and ruin an investigation, Russo said.

Bucci said the inspectors want to help take down entire drug operations, not just go after those getting the drug shipments.