We ran the numbers: Here’s how Democrats running for governor have been raising money
By Chris Cioffi  -  May 9, 2018
471 views

COLLEGE PARK, Maryland — A crowded field of Democrats are elbowing for position before June’s primary, pulling in millions of dollars in hopes of being the party’s nominee to take on Maryland Gov. Larry Hogan.

Some candidates are forming networks of small donors, while others are focusing more on checks from large contributors — including celebrities like Dave Chappelle, Domonique Foxworth and Ashley Judd. Capital News Service analyzed the candidates’ campaign finance report data for 2017. Here’s what we found. (Reports describing fundraising through the first five months of 2018 are scheduled to be released in a few weeks).

Former NAACP head and longtime Maryland activist Ben Jealous is a strong advocate for progressive policies like universal healthcare and a $15 minimum wage.

He stumped for Bernie Sanders in 2016, and received his endorsement last year.

Sanders’ campaign raised large sums from small donors, and Jealous has too. Over 9,600 people contributed to his campaign, the majority giving $250 or less. Those small donations make up about 16 percent of his total contributions — the most raised from small donors by a Democrat.

Building a small donor network gives candidates a funder base that can be called on to meet funding goals, said Jerusalem Demsas, Jealous’ deputy communications director.

“It’s not about the amount of money coming from Maryland. It’s about the number of Marylanders,” she said. “They’re able to give multiple times.”

2. Several candidates got most of their money from people who gave more than $2,500 — but Jim Shea got by far the most.

Jim Shea, who previously chaired the Baltimore-based Venable LLP, loaned his campaign a half-million dollars — and still raised more money than any other candidate, mostly from big-spending donors. He got about 60 percent of his contributions from donors giving over $2,500. The Shea camp’s average donation was $1,020 — one of the highest in the race.

“Our base of support comes from meeting voters across the state and talking to them where they live about the issues that matter to them most,” she said.

A balanced number of small and large contributors can be beneficial in candidate fundraising efforts, said Todd Eberly, a political science professor at St. Mary’s College of Maryland.

If you get support from a contributor who gives the maximum allowed by law, they can’t contribute again later, he said. Maryland law prohibits a person from contributing directly or indirectly more than $6,000 to a political committee during an election cycle.

“What you want is this army of folks who can’t come close to the max, but they can give you 20 dollars or 50 dollars, and you can go back to them in a few weeks,” he said.

Jealous and Baltimore County Executive Kevin Kamenetz each got about half of their money from donations of over $2,500.

Ross got 60 percent of his contributions from larger donors. That’s helping get the message to voters, said Daniel Ensign, a spokesman for the Ross campaign.

“There’s obviously a big difference between who we’re talking to and who we’re raising money from,” he said.

3. The people at Jim Shea’s job really like him.

Shea is a longtime attorney who worked as managing partner and chairman of Baltimore-based Venable LLP, one of the largest law firms in the country.

The campaign received about 30 percent of its total contributions from donors listing Venable as their employer. Gilley, Shea’s communications director, said it makes sense that those who know him support him.

“As governor, Jim will never be beholden to anyone but the people of the state of Maryland and his own conscience,” she said.

4. Famous people in Hollywood and the Big Apple want a piece of Maryland’s election

Jealous got funds from Troy Carter, a Spotify executive and the former manager of Meghan Trainor and Lady Gaga.

Jealous also got financial help from Jada Smith and max contributions from his godbrother — entertainer Dave Chappelle — and Chappelle’s wife. He also got the max from philanthropist George Soros and Ben Cohen, co-founder of Ben and Jerry’s.

Alec Ross, a former advisor to Hillary Clinton at the State Department, got $1,000 from Domonique Foxworth, a former NFL and University of Maryland cornerback. He also got max checks from 21st Century Fox CEO James Murdoch, and his wife Kathryn Murdoch. 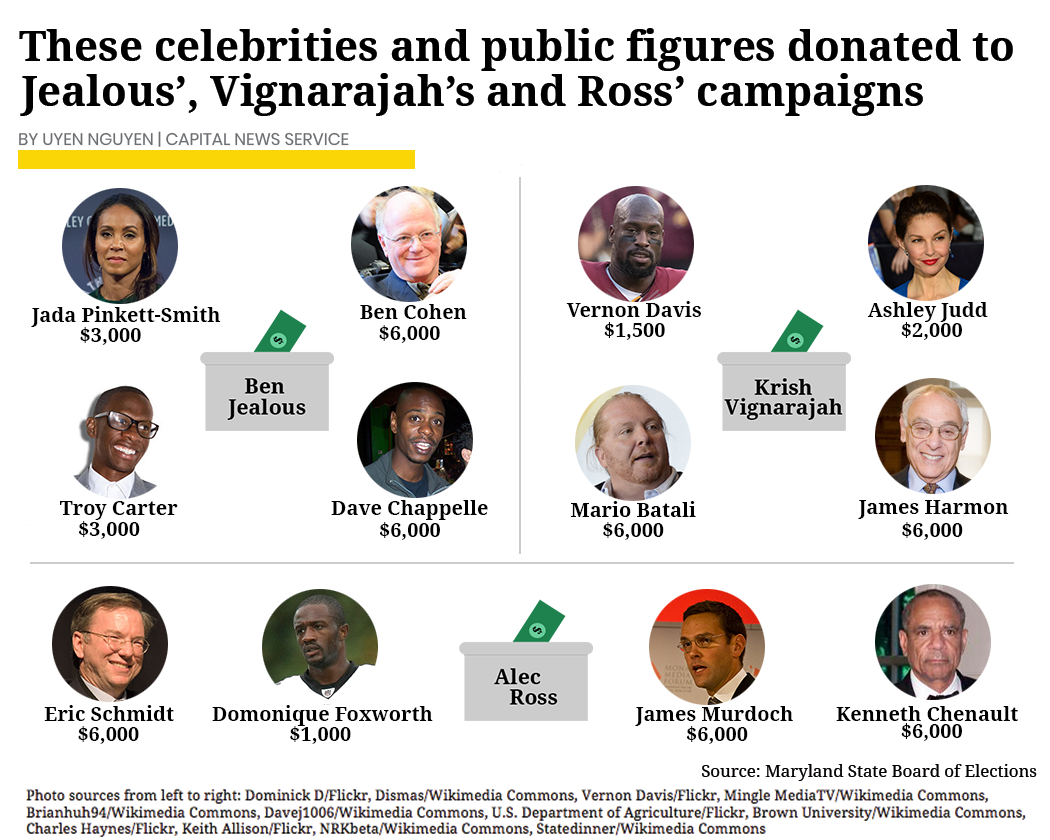 Vignarajah got $6,000 from fund manager and Clinton fundraiser James Harmon and his wife Jane Harmon. She also got $1,500 from Washington Redskins tight end Vernon Davis. Ashley Judd also gave Vignarajah $2,000 and worked with her on parts of her platform.

5. People living in California and New York have deep pockets for Maryland Democrats

Non-celebrities in New York and California have been big donors for several candidates in this year’s race.

That makes sense, because “New York and California are the banks for national Democratic campaigns,” Eberly said.

The support is good, but it’s not always beneficial, he said. “These large groups or outside donors, they can give you money, but they can’t give you a vote.”

Nearly half of Jealous’ money came from contributors with a California address and 13 percent came from New York.

Demsas, Jealous’ deputy communications director, said the candidate’s national appeal is crucial for mounting a bid against Hogan, who also has a national profile. She also pointed out that though Maryland donors gave less, more were based in the state than elsewhere.

Like Jealous, Ross got more than half of his campaign funds from California and New York.

Ross spokesman Daniel Ensign said many of the donors outside the state know Ross from his time at the nonprofit One Economy. It assisted NGOs starting online communities and integrated technology into diplomacy.

Vignarajah received a total of 34 percent of her contributions from donors in California and New York.

6. Kevin Kamenetz, Rushern Baker and Rich Madaleno each have drawn a lot of money from their home areas.

A big challenge for political newcomers running for statewide office is getting their name and message out beyond their home areas, Eberly said.

He cited a Mason-Dixon poll released in March as a measure of candidate name recognition. The poll found that Baker is backed by about a quarter of Democratic primary voters surveyed.

Kamenetz, Baltimore County’s executive, raised over 90 percent of his money from contributors within Maryland — and about 20 percent had a Baltimore address.

Kamenetz’s campaign, which has just over $2 million in the bank, did not respond to requests for comment.

The rest of the field got 13 percent, but 36 percent of voters said they still hadn’t made up their minds.

Madaleno raised about 41 percent from Montgomery County towns. He represents the area in the Maryland Senate.

7. Several candidates have made sizable contributions to their own campaigns

Shea has plowed a half-million dollars into his own campaign. Madaleno and Vignarajah loaned themselves $124,000 and $100,000 respectively.

Each of the candidates’ campaign loan made up about a quarter of their campaign total.

Shea’s contribution appeared to kickstart his push to raising over $1.5 million. But the other two each raised less than $350,000, and that could mean trouble.

“If you are relatively well off and you have the money to lend yourself, then there’s nothing wrong with that,” Eberly said. “If that ends up being one of your major sources of money, that tends to be a problem.” 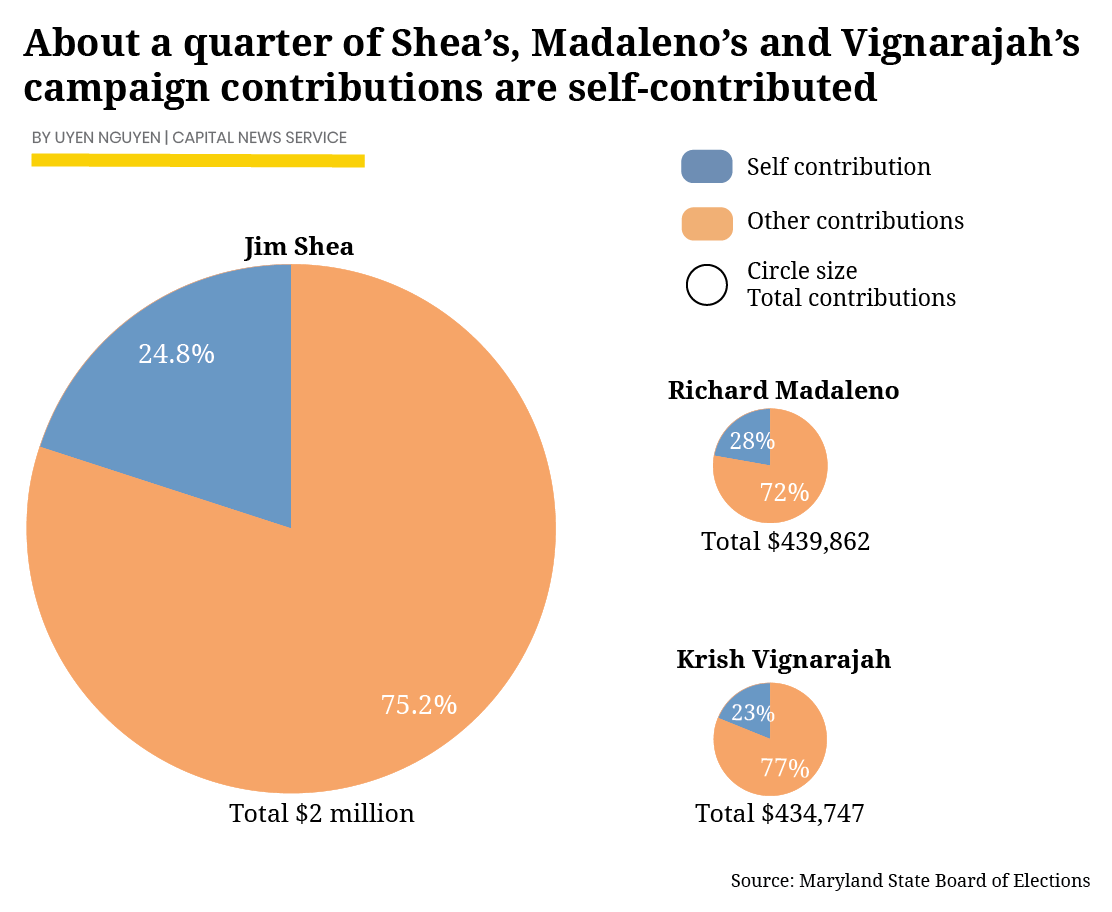 Madaleno’s press secretary Marguerite Gallorini said the campaign was pleased with its start.

“While we didn’t lead the pack in fundraising last year, the campaign is extremely proud of our accomplishments,” she said.

Waickman, the Vignarajah campaign’s communications director, said the candidate loaned herself the money because female candidates have historically had a harder time raising money than their male counterparts.

“As a whole, women candidates are much less likely to self finance,” she said. “And women have the hardest time raising money in this era of big money politics.”

She said that the loan boosted the campaign in the early going, but does not indicate that the campaign was in trouble. As more people hear from Vignarajah, fundraising has accelerated.

“I say it’s a challenge,” she said. “But it’s not insurmountable.”