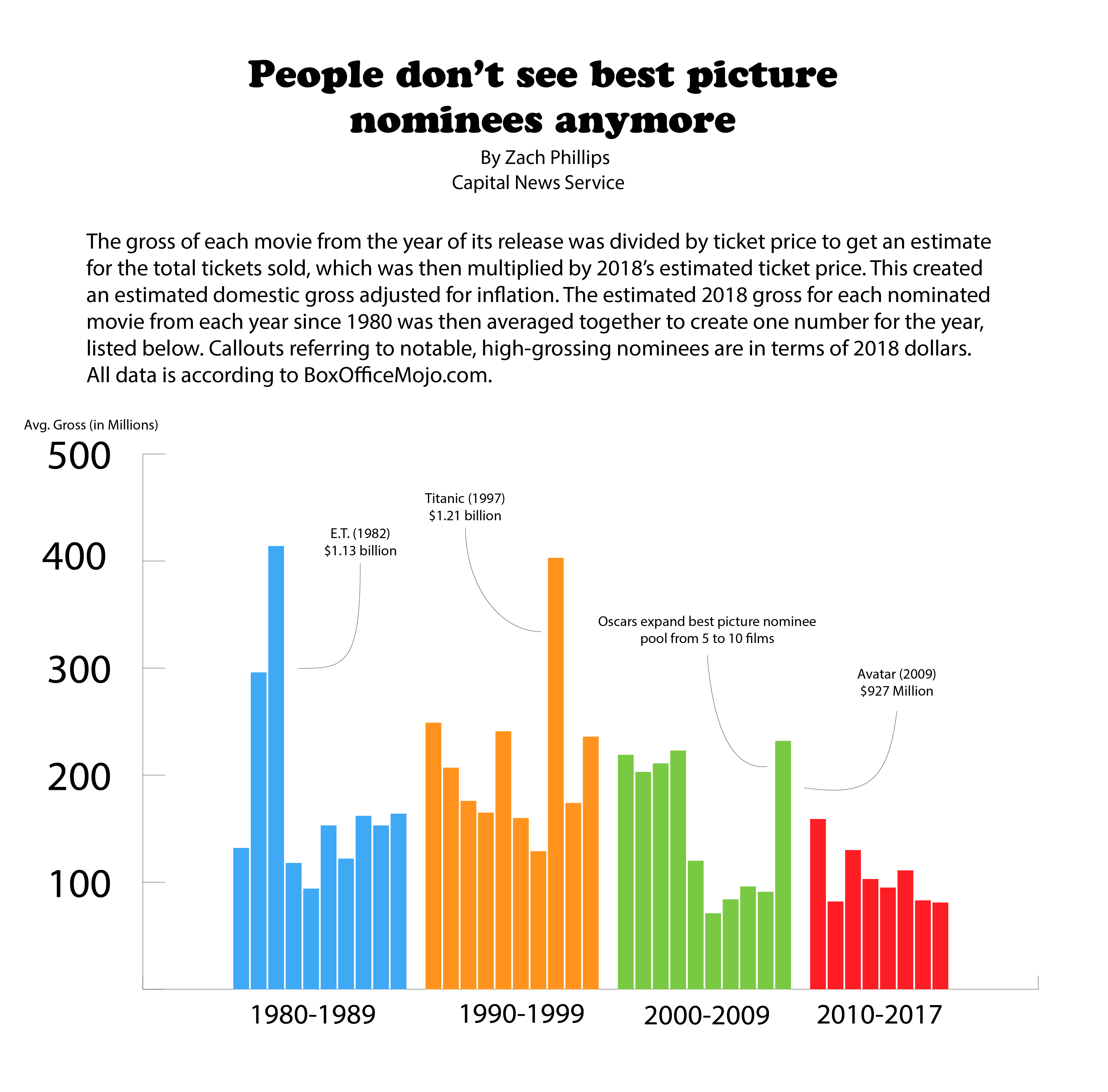 CNS used domestic gross and ticket prices at the time of the movies’ releases to estimate how many tickets were sold. This helped calculate an estimated gross when adjusted for inflation.

In every single year in the 1990’s, at least one nominated movie was among the top five highest grossing movies of the year. But in the last decade, nominated movies ranked among the highest grossing movies of the year only five times. None of those movies won. The last movie to both win the box office and best picture was “The Lord of the Rings: The Return of the King”, released in 2003, one year before the drop off.

This summer, the academy announced a new category for achievement in popular filmmaking. The new award was one of several measures designed to help bring more viewers to the ceremony, after record low viewership for the most recent ceremony. Due to significant negative feedback, the award was quickly removed from next year’s Oscars lineup. The Oscars’ nominations of lower grossing movies may be a more gradual change that has only begun to manifest itself, and started to sap the award ceremony’s television audience.

The Wall Street Journal analyzed the gross of best picture nominees around the time of last year’s Oscars. Their analysis found that a significant portion of the lowest grossing best picture winners had been released within the last 12 years. The change could be attributed to several factors, such as the decline of DVD sales, rise of streaming platforms and successful movie franchises. And, the Wall Street Journal found, Hollywood will now nominate films that reflect what they feel is the best, regardless of a change in audience taste.

The quality of movies nominated for best picture hasn’t changed much. CNS determined this by using averaged movie ratings from sites RottenTomatoes.com, IMDb.com and Metacritic.com. Nominated movies averaged a score of 83 out of 100. Most movies that have been nominated have been rated well enough to earn a certified fresh rating on RottenTomatoes.com. 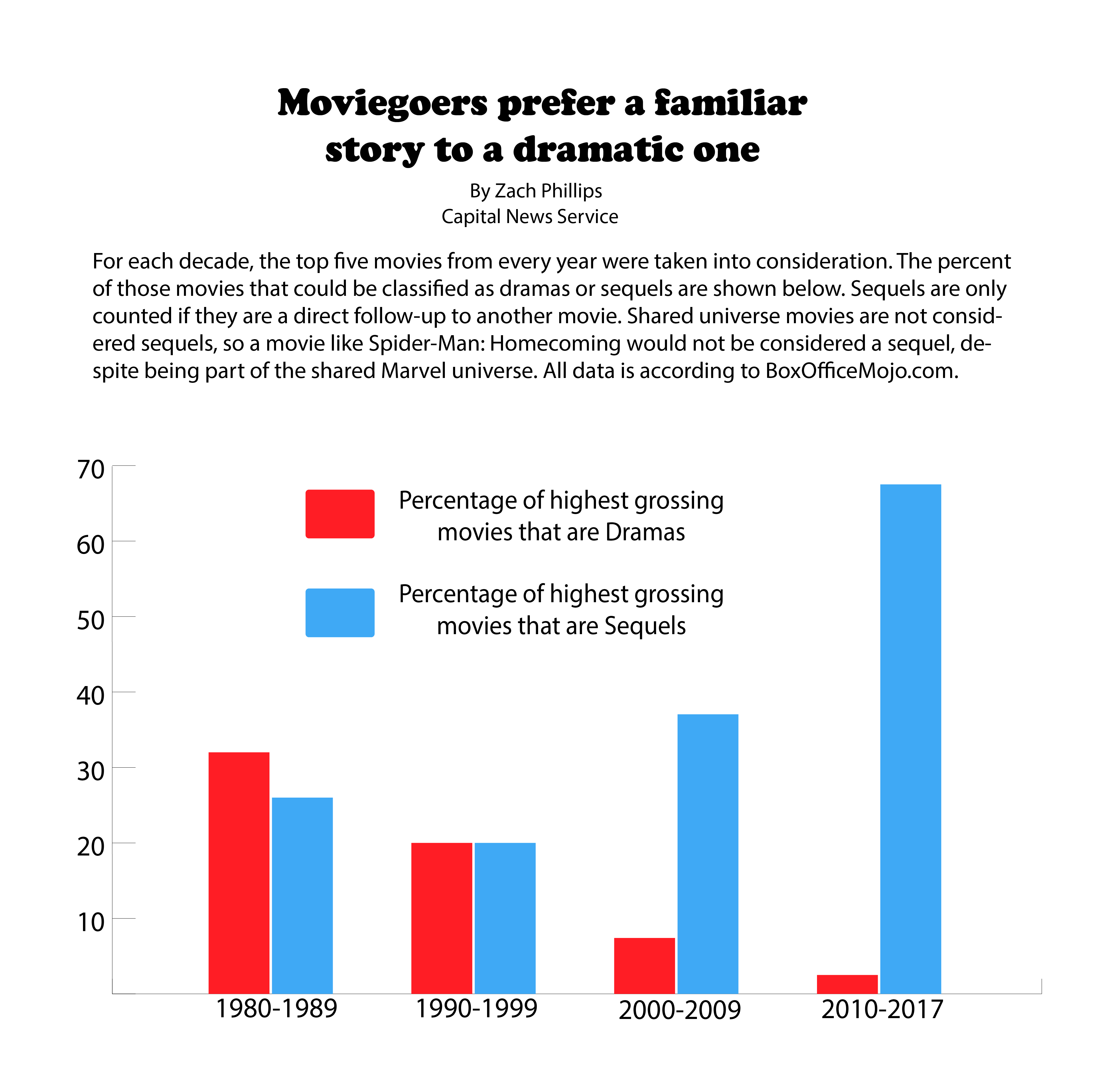 Typical film viewers only go to see a handful of movies a year, picking the best event movies to spend their ticket money on, the Wall Street Journal found. CNS looked at the highest grossing movies to determine trends in these event movies.

In the 1990’s dramas like “Forrest Gump,” “Titanic” and “Saving Private Ryan” attracted the attention of both audiences and critics, and each earned recognition at the Oscars. Audiences’ taste in movies have changed drastically since then.

In the last seven years, around 68 percent of movies that grossed within the top five for each year have been sequels. Less than three percent were dramas.

Research from the Content Strategist found that Hollywood is releasing more sequels than ever, and in practically every case, the sequel is less popular with fans than the original and grosses less money. Since 2012, however, the average rating of high-grossing, movie sequels–or the event movies for that year–has improved and remained consistently high.

Aside from a few outliers, high grossing sequels from the 1980s, 1990s and 2000s tended to score about a 60 out of 100. From 2012-2017, however, sequels have averaged a score of 77. Regardless of academy recognition, today’s movie franchise event movies score well enough with both fans and critics to earn the certified fresh rating, and land within the scoring range of modern best picture nominees.