WASHINGTON – “Say it loud, say it clear, Kavanaugh is not welcome here,” protesters chanted as they marched Thursday in withering heat along Constitution Avenue from the E. Barrett Prettyman Courthouse to the Supreme Court.

Hundreds of sexual assault and rape survivors, women, men and some celebrities to demonstrate frustration and anger ahead of a likely Saturday Senate vote that would confirm Brett Kavanaugh to the nation’s highest court.

Crowley was among many protesters who marched in the Women’s March the past two years.

Organizers from that annual Women’s March hosted Thursday’s demonstration, along with Planned Parenthood and the American Civil Liberties Union and preached for a peaceful protest.

“We are powerful people. Nonviolence is not passive, we are part of a movement,” Linda Sarsour, one of the Women’s March organizers, said before introducing guest Sen. Elizabeth Warren, D-Massachusetts, a strong critic of Kavanaugh.

Warren has been outspoken throughout the week on Twitter. 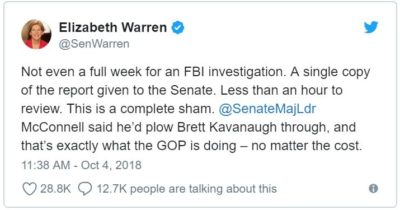 “I am angry and I own it,” she said. “I am angry on behalf of women who have been told to sit down and shut up.”

Standing beside him in support of the confirmation was Washington Rev. Leroy Swailes, who was in the spotlight in 2009 fighting against the District of Columbia’s same-sex marriage bill.

Maryland’s Toni Van Pelt, president of the National Organization for Women, said she marched to show that women are not going to be silenced.

“We are never going to stop until he no longer sits on any bench, not just the Supreme Court bench,” Van Pelt said, referring to Kavanaugh. “We want these angry white men that sit on the Judiciary Committee and in the Senate to know that women are not going to stop. We are here, we are en masse. We are at home in front of our federal court buildings.”

In front of the Supreme Court, men and women survivors from Maine, Arizona and Alaska urged their senators to vote “no” against Kavanaugh as they recounted their personal experiences asking senators to “believe them:”

“My name is Joel Dolphin I am a father, a husband, an army veteran, a police officer and I’m an independent and I am a rape survivor. I am from Alaska. Senator (Lisa) Murkowski, do you believe survivors matter?”

Murkowski, a Republican, is believed to be one of the key undecided GOP votes.

On a stage set up in front of the Court, prominent voices, including comedian Amy Schumer, stood in support behind senators, calling for people to vote in November.

“We’re going to keep showing up and no matter how this goes, they cannot keep us down. We will win. A vote for Kavanaugh is a vote saying women don’t matter,” Schumer said.

The crowd echoed back:“November is coming.”