LEXINGTON PARK, Maryland — It all started with a sketch on a napkin in a hotel room following a few drinks at a bar in Frostproof, Florida.

Those sketches officially came to fruition on Aug. 5 in the form of Flat Broke Shooters Range — an 11,000-square-foot, indoor gun range in Lexington Park, Maryland.

The owners understand that their business is in the heart of a community that was once broken by a high school shooting.

But Steve and Cindi Thomas believe that their public indoor range is a needed, secure environment for the community to practice and learn about firearms.

“We want to provide a safe place for people to come and shoot year round,” Steve Thomas said. “(But) it’s Southern Maryland. Just like most places around the country right now, people are running out of places to shoot their gun (safely).”

“We have not had that (indoor) option for — it’s been at least 20 years that we have the ability to shoot anywhere indoors around here,” said Southern Maryland resident Bill Kitchens.

The owners of the barn-look-alike range, the Thomases are both members of the United States Practical Shooting Association, which is the largest dynamic shooting organization in the United States. Dynamic or practical shooting competitors maneuver through courses and score as many points as possible with a firearm in the shortest amount of time.

The Thomas’ fully functioning gun range, which cost the couple “a lot” according to Cindi Thomas, has steel ceiling baffles and is lined with ballistic rubber to deflect and catch a bullet in the event of an accidental discharge.

The rest of the facility includes a lounge, retail area, kitchen, an electronic target retrieval system and an instructional classroom.

“We want to step in and help with the education to help stave off the accidental tragedies,” Cindi Thomas said.

Flat Broke Shooters Range is just over eight miles away, and four turns if you’re traveling by car, from Great Mills High School.

School resource officer Deputy Blaine Gaskill fired one round, which hit the shooter’s hand, according to Babcock.

Austin Wyatt Rollins, 17, shot himself in the head approximately the same time as Gaskill fired and was pronounced dead at the scene, according to Babcock.

One year later, their son, a junior at the time, was in Great Mills High School during the shooting, the Thomases said. He had undergone active shooter training with his father when he was 16 years old.

“Now I’m not saying that every kid out there needs to get active shooting training, but he’s — again — he’s been exposed a little bit more than everybody else,” Steve Thomas said. “And there’s a lot of good that can come from somebody that understands what’s taking place.”

Great Mills High School principal Jake Heibel said that he has not received any negative feedback on Flat Broke Shooters Range and its proximity to the school.

“No students or parents have had complaints brought to me,” Heibel said. “It’s a little too far away.”

While Flat Broke Shooters Range, which is the only public shooting range in St. Mary’s County according to Cindi Thomas, is approximately 13 minutes away from Great Mills, a private range, Sanner’s Lake Sportsmen’s Club, is roughly 1.3 miles from the school.

Sanner’s was established in the 1950s as a chapter of the Izaak Walton League of America, which promoted outdoor activities for adults and kids, according to club Secretary Gary Faller.

Sanner’s features ranges for pistol, archery and rifle shooting for its members, and welcomes the public to shooting competitions and other special events. 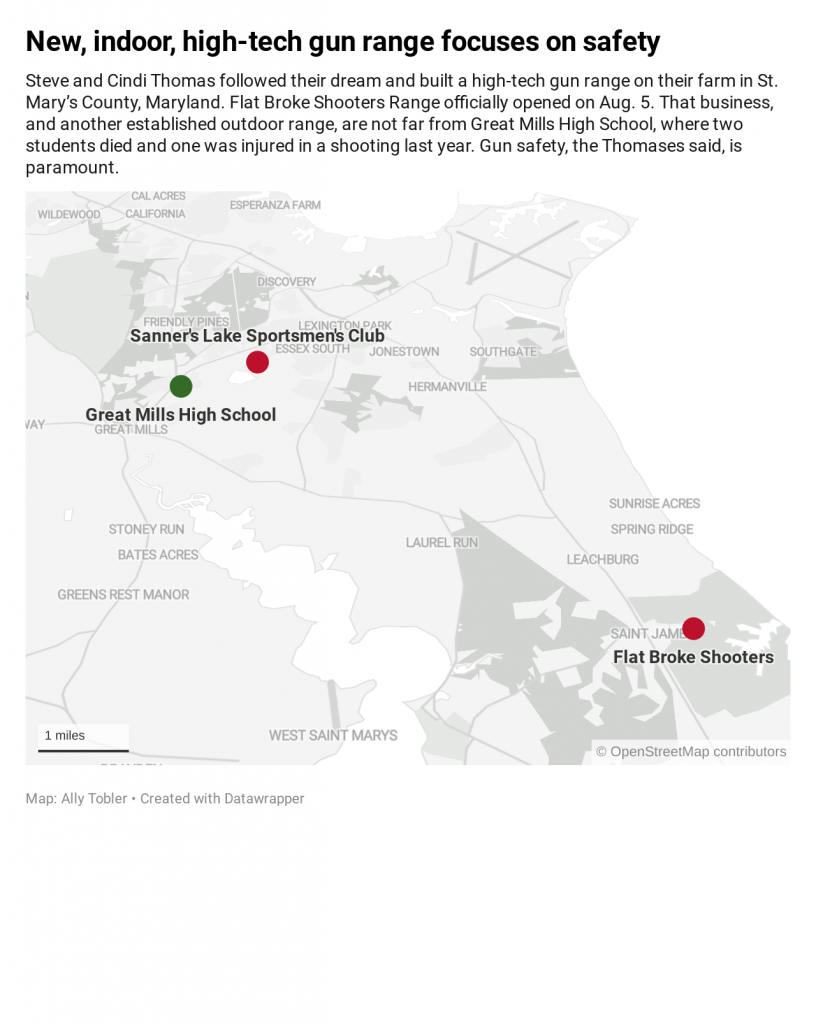 Liz Banach, the executive director of Marylanders to Prevent Gun Violence, said that the organization has not determined gun ranges as a risk, and instead turns its attention to block or update state legislation.

“Our organization is based on evidence,” Banach said. “ (There’s) no compelling evidence that a shooting range puts anyone at risk. (It’s) not somewhere we would allocate attention.”

“It’s the latest design specs — every aspect about it is safety,” Kitchens, a member of Flat Broke Shooters Range, said. “Everybody I talk to, even the people that belong to the competing range think that it’s a good idea.”

Located on a 4.5-acre farm that is home to 11 horses, Flat Broke Shooters Range has five full-time employees, according to Cindi Thomas.

The range has 10 shooting lanes with technology that allows targets to rotate and be placed at a distance up to 25 feet away. Members and visitors can shoot pistols, rifles and shotguns.

Memberships are $35 per month for individuals after a $50 initiation fee, and $40 per month for families — including spouses and adult children living at home — with a $75 start-up fee.

Children 7-17 can shoot for free with an adult chaperone but must be accompanied by a parent on their first visit.

Non-members pay $15 for an annual safety card, $25 per hour for the first shooter and an additional $10 for every person in the same lane.

At the first visit, and annually, all participants much watch a training and safety video.

There are about 84 ranges in Maryland — 30 indoor and 54 public, according to National Shooting Sports Foundation Director of Public Affairs Mark Oliva. This number includes Sanner’s, but not Flat Broke.

Participants who want to shoot at the Flat Broke range can bring their own ammunition or buy some on site.

Steve and Cindi Thomas are federally licenced firearms dealers and can sell guns out of their business, but recommend their customers purchase them at a local gun retailer.

When purchasing a firearm at a local retailer, customers are not typically granted access to a trial with the gun, Cindi Thomas said.

Flat Broke Shooters has 23 types of guns for rental, according to Cindi Thomas.

The state’s General Assembly is majority Democrat, and Maryland has the fourth-strongest gun laws in the country, according to gun-control advocacy group Giffords Law Center’s annual gun law scorecard.

Attorneys at Giffords track and analyze gun legislation in all 50 states, ranking the states based on strength or weakness of bills passed.

Maryland Gov. Larry Hogan, a Repbulican, received an “A-” grade by the National Rifle Association when running for office in 2014, according to the Baltimore Sun. In 2018, Hogan signed measures including banning bump stocks and rapid-trigger devices, and the gun-rights group lowered his grade to a “C”, the Sun reported.

The National Rifle Association would not confirm or comment on Hogan’s grades.

After Hogan’s ban of bump stocks, Giffords’ ranking of Maryland jumped from sixth- to fourth- strongest in the nation.

Cindi Thomas said that the couple was not influenced by the contentious political climate within the state and country surrounding gun rights and gun control.

“We focus on doing what we know a lot of people are interested in doing in this part of the state,” she said. “If you go out to Western Maryland — go out the Eastern Shore — there’s certain pockets of Maryland where firearms are very common.”

“We just happen to be in a county where they’re quite popular and for lawful sporting purposes,” Cindi Thomas said.

“I have a family membership for my 24-year-old daughter, (she) is the other member on the membership,” Kitchens said. “Both my kids have done shooting with me and we plan to do more (at Flat Broke Shooters Range).”

Along with offering basic classes, including pistol cleaning, ladies’ basic pistol training and youth courses, the couple aims to establish competitive shooting teams within the area.

“It would be neat to be able to educate, train and if we can somehow turn that into a team competition — whether it’s high school age, junior high school. That would be the ultimate (goal),” Steve Thomas said. “But with (school shootings) happening, there’s a lot of negative thoughts toward that.”

Cindi Thomas began shooting in 2008 to spend more time with her husband but developed a passion for the sport. In 2014, Cindi Thomas placed fourth at the United States Practical Shooting Association nationals.

Along with running the range with her husband, who works there full-time, Cindi Thomas is employed with the Navy as a financial manager.

Prior to the opening of Flat Broke, some of Cindi’s female coworkers approached the couple about an instructional course.

Using their private range behind their house on the farm, Steve Thomas developed a course outline of sorts and began teaching them shooting basics.

The Thomases then took a few National Rifle Association instructional classes and began teaching individuals with varied experience in firearms.

“We found that we had a knack for it,” Steve Thomas said. “And it really helped as a couple because in some instances, the man would prefer to go to Cindi, or the woman may prefer to come to me.”

Over the past 10 years, Steve and Cindi Thomas said, they have trained nearly 2,000 people in their garage and backyard, relying on word of mouth for their marketing.

Babcock, who worked over 17 years with The Enterprise news organization prior to his current work with the St. Mary’s County Sheriff’s Office, covered the shooting range’s development and said that there was widespread support for the project.

“The reaction of the community and the board members themselves were very positive. Folks were looking forward to having the facility open because there are no (public) shooting ranges in St. Mary’s County,” Babcock said. “It was definitely supported, it was not a controversial project that came through.”

“A lot of people try to make a world champion shooter in one day, and you can’t do that,” Steve Thomas said. “You just need to teach the fundamentals to people and teach it to them right.” 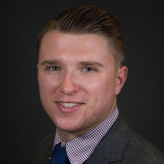