In wake of his Senate acquittal, Trump angrily lashes out at Democrats and other critics
By Charlotte Parker Dulany, Haleigh Whisted and Nicole Weinstein  -  February 6, 2020
274 views

At the National Prayer Breakfast and later in the East Room of the White House, Trump proudly held up newspapers with headlines highlighting his acquittal in the Senate Wednesday on two articles of impeachment for abuse of power and obstruction of Congress.

Less than 24 hours after the final vote to acquit him, Trump unloaded on a host of people and institutions he perceived as his tormentors, including House Speaker Nancy Pelosi, D-California, Senator Mitt Romney, R-Utah, Rep. Adam Schiff, D-California, former FBI Director James Comey, the FBI in general, the courts, GOP challengers and former Vice President Joe Biden and his son, Hunter Biden.

“They have done everything possible to destroy us,” Trump said at the prayer breakfast, referring to the Democratic members of Congress who supported his impeachment. “They know what they are doing is wrong, but they put themselves far ahead of our great country.”

“…We’ve been going through this now for over three years,” the president said later at the White House. “It was evil, it was corrupt, it was dirty cops, it was leakers and liars, and this should never, ever happen to another president, ever. I don’t know that other presidents would have been able to take it.”

The National Prayer Breakfast is held annually on the first Thursday of February for political and religious leaders to gather and reflect on faith. Presidents traditionally have used this opportunity to promote their administration and policies, as well as to strike a conciliatory tone towards political opponents.

At the annual gathering that is centered on religion, Trump appeared to take a swipe at Romney, who cited his faith as a guide for his vote to convict the president, and at Pelosi, who has said she prays for the president.

“I don’t like people who use their faith as justification for doing what they know is wrong,” Trump said.

Romney, a member of the Church of Jesus Christ of Latter-day Saints, began his address to fellow senators Wednesday, “I swore an oath before God to exercise impartial justice. I am profoundly religious.” He became visibly moved before adding, “I take an oath before God as enormously consequential.”

Hours after the prayer breakfast, Trump took to the White House lectern for a rambling series of attacks and accusations and exhortations to cheering supporters made up of administration officials and staff and Republican lawmakers.

He called the investigation by congressional Democrats Special Counsel Robert Mueller III into possible ties between his campaign and Russia “total bullshit.”

Trump labelled the impeachment trial a “witch-hunt” and called Pelosi a “horrible person,” adding “I doubt she prays at all. These are vicious people.”

Schiff, he said, was “a corrupt politician” and “a failed screenwriter.”

Former FBI Director James Comey was a “sleazebag” and “leaking, lying and everything else,” Trump charged.

As for the FBI itself, the president said: “I love the FBI and the FBI loves me, 99 percent. It was the top scum. At the FBI, people don’t like the top scum.”

Apparently referring to Hunter Biden’s business activities in Ukraine, the president said: “But they don’t think it’s corrupt when a son that made no military, that had no money at all, is working for $300 million up and it goes to Romania and other countries. Is Ivanka (Trump) in the audience? My kids could make a fortune. It’s corrupt. But it’s not even that, it’s just general corruption.”

Trump’s two 2020 GOP challengers, former Massachusetts Gov. Bill Weld and former Illinois Rep. Joe Walsh, came in for a presidential dis as well: “We have two people running, you know. I guess they consider them non-people.”

The president’s two speeches Thursday came two days following Trump’s State of the Union address, after which Pelosi ripped up her copy of the speech. At a Thursday news conference, she further condemned Trump for his “falsehoods” and using the Congress “as the backdrop for a reality show.”

Pelosi continued, “That was not a State of the Union. That was his state of mind.”

The speaker then praised Romney, the only Republican to vote in favor of Trump’s removal on one of the two articles of impeachment.

“Yesterday the Senate acted, the first time in history that a senator has voted against his own president in a decision regarding impeachment,” Pelosi said. “God bless him for his courage.”

Prior to his vote to remove President Trump from office, Romney acknowledged that he knew he would face “unimaginable” and “enormous consequences” from the president and his fellow Republicans.

As expected, the implications were immediate. Donald Trump Jr. was quick to unleash fury at the senator following the vote on two impeachment articles Wednesday.

The president’s eldest son tweeted, “Mitt Romney is forever bitter he will not be POTUS. He was too weak to beat the Democrats then so he’s joining them now.”

In his White House remarks, Trump called Romney a “failed presidential candidate” before he told Mike Lee, Romney’s fellow Republican senator from Utah, “Say hello to the people of Utah and tell them I’m sorry about Mitt Romney.”

On January 31, Lee tweeted about Romney, “We have disagreed about a lot in this trial. But he has my respect for the thoughtfulness, integrity, and guts he has shown throughout this process.” He concluded: “Utah and the Senate are lucky to have him.”

Senate Majority Leader Mitch McConnell, R-Kentucky, received a standing ovation from the crowd after the president thanked him for doing a “fantastic job,” presumably in fighting Democrats’ efforts to add new witnesses and documents for the trial.

The president then promised House Minority Leader Kevin McCarthy, R-California, that he would become “speaker of the House because of this impeachment,” and that he was “going to work hard” to make it happen.

Trump mentioned the possibility that he will be impeached again, joking that this time it would be for something as light as jaywalking.

“So we’ll probably have to do it again, because these people have gone stone-cold crazy,” Trump said of Democrats. “But I’ve beaten them all my life, and I’ll beat them again if I have to. But what they’re doing is very unfair, very unfair.” 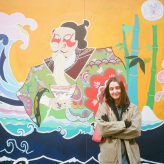