BEAR, Del. — This spring was supposed to be Jade Greene’s time to get noticed.

A shortstop leadoff hitter for Bishop McNamara High School since her freshman year, Greene has been waiting for her junior season to gauge the interest of college recruiters.

An National Collegiate Athletic Association 2018 ruling prevented college coaches from contacting high school athletes until Sept. 1 of their junior year for softball and lacrosse. Now, with a suspended season and college applications due before the start of next season, Greene is just one example of the predicament the pandemic has caused for high school juniors hoping to take their games to the next level.

“Now, of course, a lot of that comes down to what happens this summer,” said Bishop McNamara assistant softball coach Paul O’Brien. “If she’s able to play in the summer, she’ll recover just fine. That’s a huge question mark right now.”

The timetable of returning to normalcy during this pandemic is certainly the biggest question, as college spring sports coaches typically have more time to recruit during the summer and fall, when they’re also in the offseason.

“Add on to that the (NCAA) extending the eligibility of current collegiate athletes, the junior class might be in a huge pinch as programs may not be able to financially do a ton of recruiting for that class,” O’Brien said. “So, you have five classes getting scholarship money in one form for the foreseeable future.”

While the NCAA did allow schools to provide eligibility relief for spring sport athletes, they did so at the discretion of the schools.

For example, member Ivy League institutions have traditionally ruled against allowing graduate students to play an extra year. Schools such as Princeton, Yale and Harvard have also begun to close a loophole that would have allowed student athletes to retain their extra year of eligibility if they withdraw from this semester’s classes.

Aside from recruiting concerns, Greene said, this was likely the last opportunity for Bishop McNamara, in Forestville, Maryland, to contend for the Washington Catholic Athletic Conference state title. After coming a run short in last year’s semifinals, Greene said a large senior graduating class will likely leave the squad decimated next season.

Greene’s teammate, senior pitcher Bailey Wilcox, was only 14 strikeouts away from setting the school record — a milestone O’Brien said she would’ve completed in two games if given the opportunity.

“It really hits you there,” O’Brien said. “What these folks have been working on for the last four years is affected in a way that can’t be fixed. It’s a shame.”

The Bishop McNamara softball team is just one example of athletes all around the state missing out on chances to get recruited and achieve senior milestones.

Aaron and Andrew Ray, twins on the Loyola Blakefield high school track and field team in Towson, Maryland, were also banking on boosting their recruiting profiles. In a time-based sport that allows coaches to track down runners nationwide, Andrew said he was disappointed to not get the opportunity to improve his times before talking to college coaches.

Without another opportunity to lower his times in the 300-meter hurdles race, exclusively an outdoor event, Andrew will have to go through the college application process with his current marks.

“It’s pretty hard,” Andrew said. “I was pretty excited for this season because I feel like I was bringing everything together.”

Unlike his brother, Aaron has started talking to college coaches from schools such as Lehigh, Dartmouth and Washington and Lee. Still, with a preference of going to a larger state school such as Maryland or Penn State, the potential loss of the full spring season has forced him to become more flexible.

“It pretty much means I’ll be more open to walking-on in college if needed, especially with track and field and the way that college applications work,” Aaron said. “I might go to a college I might not have considered for track and field.”

From a coach’s perspective, Georgetown Preparatory High School, baseball coach Chris Rodriguez told Capital News Service his message to his uncommitted juniors was to stay positive and take this time to be assertive, to introduce themselves to college coaches and keep them updated on what they’re doing during the quarantine to get noticed.

“I don’t think we can do a whole lot right now other than try to be aggressive and stay in sight in some shape and form (with college coaches) that we already had connections with and try to make some new ones,” Rodriguez said. “(College coaches are) not playing either, so they’re probably in front of their computers as much as we are.”

Rodriguez, whose son Ryan is a sophomore on the varsity team, said he’s nervous about the prospect of athletes not getting a chance to compete in the summer or fall when college coaches are more focused on recruiting. Still, his message to his team has been taking this time as an opportunity to get ahead.

“You just have to find a different way to engage,” said Rodriguez, who’s also the dean of students at the Bethesda, Maryland, school. “We’re all in it together and we only have so many options, and I think it’s going to be this way for a few more months. (We’ve got to) deal with it, and get better.”

Greene has taken this time under quarantine to be proactive in contacting colleges, including an innovative way to show coaches her skills while remaining in isolation at home.

Video of Greene hitting softballs in her garage. She said she sent this video to college coaches so they can see her play during the pandemic. (Courtesy of Jade Greene.)

For other athletes around the state who’ve already been through the recruiting process, the potential loss of a full spring season means a missed last opportunity to leave a legacy their senior seasons.

Ryan Calvert, a senior pitcher and heavy hitter for La Plata High School in Charles County, Maryland, baseball, was touted as a potential Major League Baseball draft selection following his spring season. In light of potential financial ramifications of the postponement of the season, the MLB is discussing shortening this summer’s draft from 40 rounds to as few as five.

“It would’ve been nice to be drafted this year, but I really want to go to college and play baseball there and get my education,” Calvert said. “I’m preparing for both so I don’t want to leave any options out.”

Fortunately for Calvert, if high school sports aren’t resumed this spring, he’ll end his high school career as a state champion after leading his team to the 2A title on the mound against Middletown, in Frederick County, Maryland, last May.

“It was fun watching him grow. He’s always been big for his age but wasn’t always very athletic. To watch his athleticism catch up to his baseball IQ and ability has been a lot of fun to watch,” said La Plata head coach John Childers, who’s coached Calvert the last six years. “And to not be able to cap it off, fortunately, he got to win a state championship on the mound last year, but it’s hard for him to not to get that chance to do it again.”

Other high school athletes weren’t so fortunate to get that chance — at all.

Such was the case with Gilman High School senior Dylan Walters, who said he’s been dreaming of the chance to play No. 1 singles on the tennis team. After making varsity as a freshman, Walters has progressed up the depth chart to earn the spot his senior season. 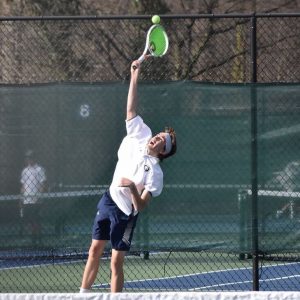 Walters was nearly the No. 1 singles player for Gilman, in Baltimore, his junior season, but classmate Nick Boucher overcame him in the final match during tryouts. This spring, however, Walters said head coach Steve Krulevitz sat him down and said how proud he was of his hard work to secure the top spot for a team that has won the last six state titles.

“It’s a real honor to play No. 1 singles for Gilman, and I didn’t get to do that,” said Walters, who will play at Brandeis University next year. “It’s honestly devastating.”

At Baltimore’s Boys Latin High School senior lacrosse attackman Brendan Grimes hoped to get another year of crucial development before heading to play for nearby Johns Hopkins University after missing his junior season from a back injury.

“I felt that great feeling a lot coming into senior year,” Grimes said. “Unfortunately, that was taken away. For next season, to complete a full season would be great for me to get that confidence under my belt again.”

Grimes said he worked hard last year in physical therapy and did constant back and core exercises to get back into shape, something that helped him land a spot on the USA Under-19 national team roster. Now, he’s hoping to use the same patience to continue to work on his game so he’s ready for the next level.

For Ella Mannix, a senior lacrosse midfielder for Boonsboro High School headed to play at Salisbury next year, hoped-for milestones like reaching her 100th goal and making another run to the 1A championship seem all but gone with the current status of the pandemic. She said she’s been working since her freshman year to be nominated for the Player of the Year awarded by her local Hagerstown, Maryland, paper, The Herald-Mail.

Boonsboro lost in the state championship Mannix’s sophomore year before losing to the same side, Patterson Mill, in the semifinals in 2019. Mannix said she was hoping for a chance to lead her team to another postseason run. 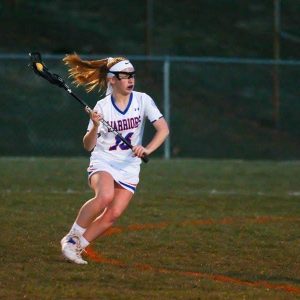 “We had workout plans set and wanted to stay in shape so we can come back the same place we were when we got off these two weeks, but when they said the schools are being closed another four weeks it just kind of went downhill honestly,” Mannix said before it was announced schools would be closed until at least May 15. “It’s just really sad for all of us because it’s the whole season we’re missing out on that we had a lot of high hopes for.”

Rodriguez said his assistant coaches at Georgetown Prep started a weekly baseball trivia night on Zoom, with the seniors dividing the squads into eight teams to compete. He said it’s a fun way to stay connected.

O’Neil’s Gonzaga, in Washington, D.C., has also kept in touch with weekly Zoom chats and through a workout program that each player sends out to the team, organized by jersey number.

When Gonzaga lacrosse learned their season was suspended, they were getting ready for practice, planning to review a scout report the day before a game against rivals Georgetown Prep. After the news, O’Neil gave the seniors three options: go home right away, play an intrasquad basketball tournament, or scrimmage with teams made up of Gonzaga players from Maryland and Virginia.

The seniors chose the latter two options, taking every last minute to stay at the school with their team before leaving for a future of uncertainty.

“The guys used up all that time,” O’Neil said. “Once we played that game I had an emotional talk with them about the unknown and that they’re cared about if they need anything. They didn’t want to leave the field. They wanted to hang out and be together.” 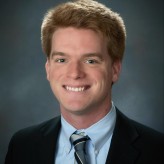