EASTON, Maryland — When residents here describe their town, they describe a paradise. There’s no crime and everyone—black and white—gets along in neighborhoods just a few miles from the banks of the Eastern Shore’s Tred Avon River in Talbot County.

Those waters, however, once led to one of the most prominent slave ports in the country. Talbot County profited off of the human cargo the ships carried, condemning slaves to labor that sustained thriving agriculture and seafood industries.

With the Civil War came the opportunity for slaves to gain freedom through military service. Eighteen who fought for the Union then returned to Easton to found Unionville, a haven that got them through the violence of the later segregationist Jim Crow era.

Throughout the 20th century, black and white communities in Easton developed into the largely middle-class households they are today, but as parallel, segregated worlds. Lines started to blur once segregation ended. But as much as Easton and its neighbor Unionville may want to move past the deeply unequal relationships that etched their past, they can never quite escape them.

This proximity is one reason why a recent but unresolved debate about taking down Easton’s Confederate statue has been so delicate.

Soldiers who sacrificed their lives to ensure that African American slaves would never be free are glorified in a bronze statue on the courthouse lawn. Five miles away in Unionville, the graves of 18 of their military opponents, born into slavery, are buried behind a church where their descendants worship every Sunday.

Around the bend from the church graveyard is Wye House Plantation, which was the largest plantation on the Eastern Shore and where Frederick Douglass was enslaved. The original structure looms and a descendant of Douglass’ owner still lives there. Though a statue of Douglass was erected in front of the courthouse to honor the abolitionist, the county council approved it after months of debate and stipulated it could not exceed the height of the Confederate statue it parallels.

Communities with Confederate statues across the country are reckoning with relics commemorating the Civil War. In Charlottesville last year, such a statue became the gathering point for a white nationalist and Nazi rally that erupted into violence and left one anti-protester dead. Baltimore authorities removed four Confederate monuments overnight in their city just a few days later.

People in Easton are grappling with how their histories are honored as a handful of activist residents are forcing the town to confront its past.

Although the controversy over Easton’s Talbot Boys statue has simmered for only a couple of years, its story begins 104 years ago.

Joseph B. Seth, a lawyer from Easton, wrote a letter to Col. David G. McIntosh of Towson in 1914, asking McIntosh to help him secure a monument with the names of the 84 Confederate soldiers from Talbot County.

“We had more men from this County to gain positions of high distinction than there were from any other County in the Country, either North or South,” he wrote.

When Easton erected the monument in July of 1914, Seth realized his mission was incomplete. He expressed to McIntosh his interest in placing a unique statue on top of the monument, unlike the common statues of soldiers throughout the country.

“It is my desire to get away from the conventional soldier figure which is found on all of the monuments North and South, and to get an allegorical figure representing youth and courage,” he wrote.

The county dedicated the Talbot Boys statue on June 5, 1916, an image of a boy soldier standing at attention holding a Confederate flag that drapes over his left shoulder. Although some Easton residents say they either ignore the statue or knew nothing about it as children, their tune changed three years ago when concerned residents notified the local NAACP chapter of their opposition to Talbot Boys after feeling alarmed by the shooting of nine black members of Emanuel AME Church in Charleston, South Carolina by white supremacist Dylann Roof.

The NAACP then requested the statue’s removal and a countywide debate over which side of the town’s history to honor ensued.

Before the Civil War, Talbot County had the tenth largest slave population in the state. People from Africa and the Caribbean were brought into the deepwater port at Oxford, operated by founding father Robert Morris, according to local historian Bernard Demczuk. They were then distributed on both sides of the Tred Avon River using a ferry now considered the longest running private ferry in the country.

There were 3,725 slaves and 2,964 free blacks living in the county by 1860. Slaves were sold at an open market where the county courthouse now stands.

When war broke out, brothers in the county found themselves fighting against each other, though three times as many fought for the Union as the Confederate cause.

The Talbot Boys statue was erected 51 years after the war ended during the height of segregationist Jim Crow period.

“You had this climate in 1913, 14, 15 of the highest office in the land saying it’s good to attack black people, it’s the American way,” said Demczuk. “That’s why the statue was put up.”

During that same era, there were several lynchings on the Eastern Shore, Demczuk said. Black residents, such as those in Unionville five miles away, knew not to wander far from home.

Harriette Lowery grew up in Easton but visited her grandparents in Unionville every Sunday for dinner. Her family migrated to Baltimore when she was 14, but, like many Easton residents, she said she was later drawn back to the small town’s peacefulness. 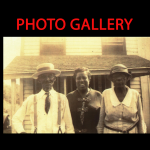 What she didn’t know was that her great great grandfather, Benjamin Demby, had been drawn back to the county decades earlier as well after serving in the United States Colored Troops.

It was at a ceremony in 1998 that Lowery said she first heard the story of the 18 soldiers. Brig. Gen. Albert Hunter was digging into the lost history, and Lowery knew one of the 18 was probably an ancestor of hers. When she learned she was correct, she was dumbfounded that her family had never told her about her heritage.

“I was 48 years old and it was the first time I’d ever heard that story,” Lowery said. “I could not understand why.”

County council member Dirck Bartlett similarly did not know he had a connection to Unionville until five years ago.

Now he treasures a thick, buckled family photo album with a portrait of Ezekiel Cowgill, the quaker abolitionist who leased the land in Unionville to the soldiers for one dollar per month. Bartlett said he found the family relic advertised in a newspaper.

Everyone in Easton seems to have a similar story. Everyone is related to someone, and despite decades where the community avoided discussing such matters, Easton’s current generation finds deep value in preserving such memories.

In the basement of an antique shop, the Talbot County Historical Society manages a vault to preserve items families have donated. Everything from dollhouses to old dresses are now becoming artifacts.

This is one reason why removing an artifact with 84 Confederate names feels wrong to people like Bartlett.

“As bad of a cause as that was, they were still just soldiers from families in this area and the families decided to honor them with a statue,” he said. “I just didn’t think it was my place to tear [it] down.”

Imposing any edits to Easton’s physical history feels radical for many white residents, even though the statue’s origin can be easily traced back to the violence of Jim Crow which followed post-Civil War Reconstruction. Many black residents who recognize that history don’t want to relive the trials that came with taking a stand against their oppressors.

That’s where the issue of maintaining the peace finds its way back into Easton’s dialogue. Doing nothing is the most peaceful option both for those who appreciate the statue and those who find it offensive.

But more insistent voices are eager to push for change. When they do, many of even the most non-confrontational residents find themselves falling on one side or the other.

Easton’s Talbot Boys statue stands on the Talbot County Courthouse lawn. Some residents believe its position sends a message of hate to those seeking justice and inaccurately portrays the Confederacy as the winner of the Civil War.

Richard Potter, an Easton native and president of the NAACP, led the organization’s efforts in 2015 to remove the Talbot Boys statue from the lawn. The members submitted recommendations to the county council, which included relocating the statue to a museum and replacing it with a statue that honors both sides of the Civil War.

The courthouse is a place where Americans go to seek a fair and just trial, according to the Sixth Amendment of the U.S. Constitution—yet, on one side of its lawn stands “a statue that honors individuals who were pro-slavery and wanted to keep us—a particular group of people—oppressed,” Potter said.

When the county council voted against the recommendations, they did so in an illegally closed meeting, a move that prompted the NAACP to partner with the ACLU of Maryland to fight the council’s violation of the Open Meetings Act. The council voted again in public, and the decision was the same—no.

For the more conciliatory voices, including Bartlett, a workaround solution came in 2011 when the county council allowed the Frederick Douglass Honor Society to erect a statue of Douglass. The statues stand 51 feet apart, on either side of the walkway leading up to the courthouse doors, both depicting life in 1800s Easton, when Confederates and those who supported the Union lived as neighbors.

Bartlett voted against the NAACP’s recommendations because he believed the Talbot Boys and Douglass statues complement one another by accurately depicting the county’s history with the Confederacy and Douglass’ triumph over slavery.

“The NAACP didn’t see it that way and that took me by surprise,” he said. “I thought that having both the statues was actually a good thing because it showed the progression of history, and having torn down the Talbot Boys statue, no one would ever know that there were Southern Sympathizers in Easton.”

Although the Douglass statue is viewed as a peaceful solution, it doesn’t tell the story of the other side of the Civil War—the Union side, according to Potter.

“[The NAACP] won’t be finished until that statue is removed and we have a monument up there that depicts the entire truth about the Civil War, as it relates to Talbot County,” he said.