CHELTENHAM, Maryland — Over the last 10 years, Maryland’s Department of Juvenile Services has seen a decline in admissions into its seven detention facilities across the state, but the number of Black children admitted is still disproportionately high.

The number of children admitted into juvenile detention facilities has gone from 7,494 in the 2009 fiscal year to 2,406 in fiscal year 2019, according to Maryland’s Department of Juvenile Services.

The department believes the decline in admissions to detention facilities is due to its ability to divert children to various youth programs instead of facing the juvenile justice system, while utilizing Alternative to Detention methods — such as ankle monitors — so that children can avoid being detained as they wait for an adjudicatory hearing.

Even though the population has decreased, Black children continue to make up the majority of the youth within the facilities.

During the three fiscal years ending in 2019, Black kids represented around 77% of the juvenile detention center admissions whereas white children made up less than 18% and Hispanic children made up 6-7 %. According to 2019 Census Data, 31.6% of Maryland children between the ages of 5 and 17 are African American. Meanwhile, 41.4% are white and 15.5% are Hispanic.

“What I see are alarm bells,” Maryland Secretary of Juvenile Services Sam Abed told Capital News Service. “When you see unfairness and (youth) not being treated fairly, it’s a call to action to develop strategies to combat it.”

The Department of Juvenile Services has been trying to find ways to fight its disparity issues and lower its admission numbers among its detention centers by diverting children to various educational and mentoring programs, but there’s still more work to be done, Abed said.

“The key for us is to be vigilant and continue our efforts,” Abed said. “We made some progress and that’s good, but there’s a history of trying to make progress and failing.”

Racial disparities remain because a child may be viewed differently by law enforcement due to their background, and crime in the neighborhood they grow up in, said Gary Ivory, a senior executive officer for the Youth Advocate Program.

The Youth Advocate Program is a non-profit organization that works with the Department of Juvenile Services to reduce the number of delinquency charges and help keep youth out of juvenile detention centers. It sends advocates into neighborhoods to assist children and their families while offering various programs and mental health care to those who are transitioning out of detention.

“You have a higher likelihood of getting arrested just based on the ZIP code you are living in and that’s across the United States,” said Ivory, who has worked for the Youth Advocate Program for 22 years. “I think that’s something you can’t solve overnight.”

Abed has seen misdemeanors and other lesser-offense crimes make up a good amount of the intake cases among African-American children.

Abed said he feels children who commit these crimes should receive help instead of being locked up in juvenile facilities.

“For low-level offenses, we should not be using incarceration. That shouldn’t be an option,” Abed said. “What we are trying to do is not punish kids, but change their behavior. We don’t need to use a criminal justice response to change the behavior.”

In the 2019 fiscal year, 69.2% of the intake cases among children of color statewide were misdemeanor crimes while 13% were crimes of violence, 9.4% were felonies, 0.4% were ordinance offenses, 6.5% were citations and 1.5% were described as “Child in Need of Supervision.”

Eric Ford, director of the Choice Program at the University of Maryland, Baltimore County, a non-profit organization that provides mentoring and support to youth in their communities, said he thinks the presence of police in predominantly black neighborhoods and schools has contributed to the racial disparities.

Over the last three years, 90% of the referrals of youth of color came from police, whereas fewer than 3% came from citizens and adult court transfers, according to the Department of Juvenile Services.

“To me, communities of color tend to be over-policed,” Ford said. “So when a young person makes a poor decision, it becomes a police issue rather than an adolescent issue.”

Baltimore juvenile defense attorney Jenny Egan grows enraged every time she sees the over-incarceration of black children, as she believes it has a negative impact mentally and emotionally.

“An arrest and being put into a cage for an adolescent child is traumatic and life-altering,” Egan said. “If we want children to successfully transition into adulthood, we need to show them in every step that they matter and they deserve the very best, and that is not what we are giving them right now.”

According to Abed, the department also uses peace circles and community conferencing, which allow youth to hear and understand how their actions have impacted others.

For over 30 years, the Department of Juvenile Services has been partners with Choice, a diversion program that allows youth to participate in community service and educational activities while receiving mental health resources and college and career readiness training.

“Programs like Choice are extremely important because it gives young people the opportunity to make mistakes without those mistakes becoming criminal,” Ford said. “We step in with the goal to get them out of the juvenile justice system.”

In the 2019 fiscal year, Choice program teams in Baltimore City, Baltimore County, Howard County, Montgomery County, and Prince George’s County served a combined 672 children, with 531 being Black children. Out of the children who were served, 98% of them didn’t receive a new charge.

The Department of Juvenile Services announced on Oct. 20 that it received a $130,000 grant from the Governor’s Office of Crime Prevention, Youth, and Victim Services to bring Multisystemic Therapy to Baltimore City.

These programs are meant to serve as alternatives to commitment while trying to deal with the racial and ethnic disparities in Baltimore City’s juvenile justice system.

Last year, 96.1% of the admitted kids in the Baltimore City Juvenile Justice Center were Black meanwhile whites, and Hispanics and other races were a combined 4%, according to the Department of Juvenile Services. In 2019, about 71% of children between the ages of 5-17 who lived in Baltimore City were African American, while 15.1% were white and 9.3 percent were Hispanic, according to Census data.

“These programs will not only help divert youth from entering the juvenile system but also provide us with one more tool to reduce the racial disparities we face,” Abed said in a statement.

Egan said she hopes the department will continue to find more ways to solve the racial disparities that have plagued the juvenile justice system in Maryland for years.

“This is something Black communities have been fighting for ages and I hope we take this opportunity to finally draw a line in the sand,” said Egan. “We have to treat our children like children. That’s my hope.” 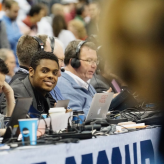