In Maryland, crisis pregnancy centers, or CPCs, outnumber abortion clinics two to one and are often located near abortion providers, colleges and universities and areas with high poverty rates and a lack of easy access to abortion services, according to an analysis of location data by Capital News Service.

CPCs are faith-based, often unlicensed, nonprofit medical clinics that advertise like they are abortion providers, but seek to deter women from considering abortion. For example, many Maryland CPCs prominently list abortion counseling as a service on their website, yet disclosures that they do not perform or refer for abortions are much harder to find.

CPCs provide free services, like ultrasounds, pregnancy tests and baby clothes, which are attractive to the populations they situate themselves by, but researchers say patients may leave their offices knowing less about their pregnancy than when they walked in.

CPC employees may share medically inaccurate information about the risks of abortion or use delaying tactics, such as lying to patients about their true gestational age or canceling and rescheduling patient’s appointments, said Sonya Borrero, director of the Center for Women’s Health Research and Innovation at the University of Pittsburgh. They “string[] people along” until abortion becomes a less available option — either because of financial, legal or transportational barriers, Borrero added.

“Any delay tactic will for sure preclude people from obtaining or receiving a desired abortion … whether or not there is a state level abortion ban,” she said.

Across the country, CPCs outnumber abortion clinics three to one, and with the number of abortion clinics going down, this divide will likely get much larger, said Borrero. The Supreme Court is hearing arguments in two cases challenging restrictions on abortions from Texas and Mississippi. If it overturns Roe v. Wade, that would allow “trigger laws” restricting abortions in 11 other states to take effect. But even as Roe hangs in the balance, CPCs provide another way to disrupt reproductive health care access.

“Abortion is a hard subject and we care for women every day making hard decisions,” said Pamela Palumbo, who is the CEO of Bowie Crofton Pregnancy Clinic, a CPC. “We are a safe place giving full, medically accurate information for them to use how they wish as they make their own decision on abortion.”

“We are a medical clinic with licensed medical staff,” Palumbo continued. She is also the president of the Maryland Coalition of Medical Pregnancy Clinics, which represents 25 CPCs throughout the state.

However, the Maryland Department of Health as well as Anne Arundel and Prince George’s County told Capital News Service that they do not have a working relationship with Palumbo or any CPC in Maryland.

Andrea Leigh Capuyan, the executive director of the Laurel Pregnancy Center, a CPC, said she does not want her center to be confused with an abortion clinic.

“The mission of the [Laurel Pregnancy Center] is to proclaim the Gospel of Jesus Christ, to promote the intrinsic value of human life, and to demonstrate Christ’s love to women and men facing an unplanned pregnancy or previous abortions by providing spiritual, physical, and emotional care,” Capuyan said.

Capital News Service called or emailed all 44 Maryland CPCs that we could identify, but only two responded.

All abortion clinics in Maryland have a CPC within close proximity to them, but some CPCs operate by themselves in “health deserts,” areas with lack of access to a Planned Parenthood, or other clinics that provide abortion care. Many Maryland residents have to travel farther to visit an abortion clinic compared to a CPC. For example an Oakland resident could visit James Isaac House, a CPC, in their town, but they would need to travel 116 miles, or about two hours to get to their nearest abortion clinic. Zoom into the map to see how close the CPCs are located to abortion clinics. Source: Capital News Service reporting

Across Maryland, the average distance between any abortion clinic and the closest CPC is just under two miles, with the closest distance being right next door, something with which Diane Silas, an administrator at Potomac Family Planning Center, has firsthand experience.

The abortion clinic sits right next to Hagerstown Area Pregnancy Clinic, a CPC. Silas said they had to paint the door a bright yellow to differentiate themselves from the CPC, which was advertising with a yellow sign that read “Free Abortion Ultrasounds.”

In Baltimore, Kana Neibert, an administrative assistant at Whole Woman's Health, deals with the same issue.

“The CPC [across the street] is set up with the pink awning, and it’s called the Women’s Care Center,” Neibert said. “It’s very easy for people seeking our services to accidentally end up across the street.” She said this happens to five or six of her abortion patients each week.

Setting up an office close to an abortion provider is a historical tactic CPCs use to try to prevent abortions, said Amy Bryant, associate professor of obstetrics and gynecology at the University of North Carolina Medical School.

“They’re not legitimate sources of comprehensive reproductive and sexual health education or services,” Bryant said. CPCs “can be dangerous to [people’s] health.”

CPCs plant themselves close to colleges and universities, whose students may find the free services CPCs offer, like ultrasounds or access to diapers, appealing. On average, the closest CPC to any college or university in Maryland is just 3.6 miles away, while the closest abortion clinic is 13.6 miles away.

For example, Eastern Shore Pregnancy Center, a CPC, is located just over half a mile from Salisbury University. In Anne Arundel County, another CPC, Birthright of Annapolis, is located one tenth of a mile from the community college.

“People who are seeking abortions are very often doing it for economic [reasons],” Bryant said. CPCs “concentrate in these areas where they're going to be more likely to have people fitting that description, and more likely to need an abortion. They are trying to position themselves to ... prevent the abortion.”

Borrero agreed and said there’s a clear need for these free services since people continue to seek them out, but “they need to be separated from the underlying ideology in which they’re currently housed.” Free services also allow CPCs to operate outside of state consumer protection laws, added Borrero.

In Maryland, 9.9% of people live below the poverty line, and while only 30% of state zip codes have greater poverty rates than the statewide 9.9%, about half of CPCs are located in these areas.

“I think patients who are economically marginalized are most vulnerable to the call for CPCs,” Borrero said. “Controlling people's reproduction has been a long standing way to oppress people.” 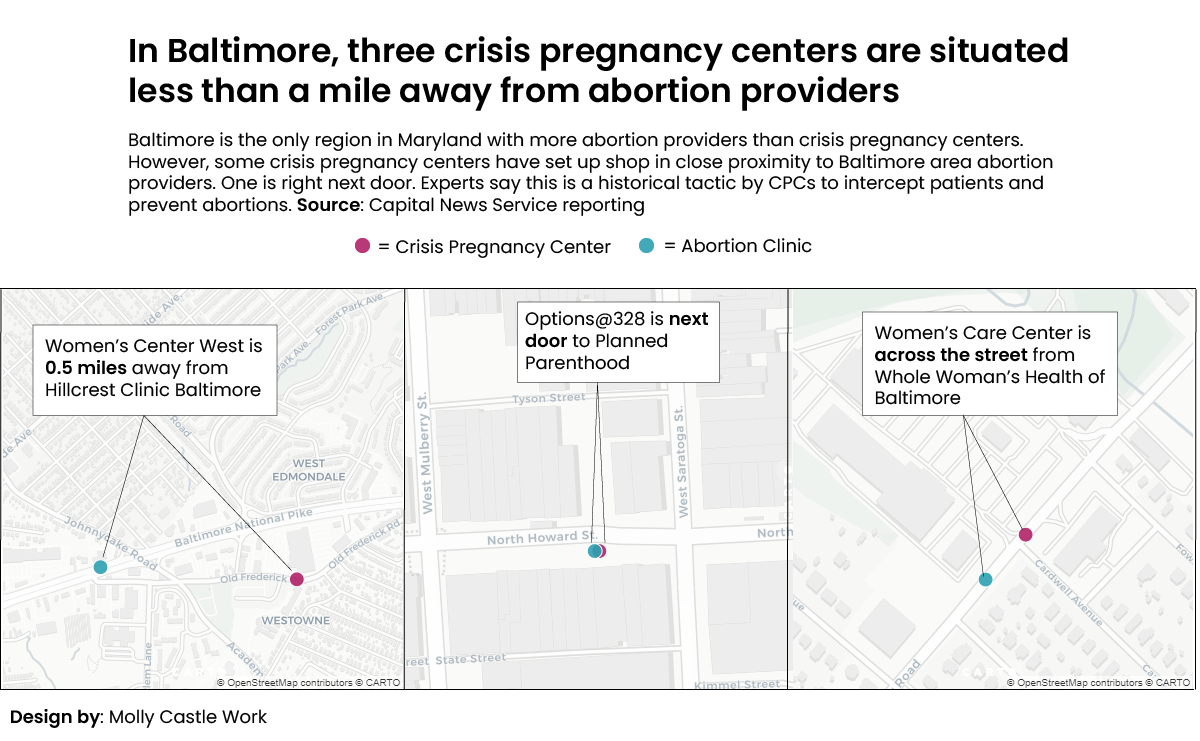 While CPC practices have long been an object of concern, there is no mechanism in Maryland to provide government oversight. Maryland Department of Health spokesperson Andy Owen said CPCs are not licensed and there is no state agency that oversees unlicensed facilities.

In 2008, the Maryland General Assembly considered legislation that would have regulated CPCs, but it was not enacted.

Maryland General Assembly Senate president Bill Ferguson said that he is “dedicated to protecting a woman’s right to choose and is exploring options to protect that right for this upcoming session,” but did not comment further on legislation specifically targeting CPCs.

At the local level, Baltimore City and Montgomery County pursued similar legislation in 2009. Although both resolutions were adopted, they were later quashed after CPCs challenged the legislation in court arguing that it violated the First Amendment.

“Women's reproductive rights are essential,” she said. “The more information women have that's accurate information about pregnancy, the more likely it is that they also have good access to health care.”

Our Method:
Capital News Service analyzed three different datasets detailing CPCs located in Maryland to determine the magnitude and spread of CPCs across the state. Duplicates across datasets have been removed and addresses updated. A full list of the CPCs and Abortion Clinics in Maryland that CNS identified are aggregated here.