During the 2021 fiscal year, Maryland residents submitted the most complaints to the Federal Trade Commission per 100,000 people regarding telemarketing sales calls and robocalls, according to recent data released by the FTC.

The FTC operates the Do Not Call Registry, which allows consumers to opt-out of most legal telemarketing calls, and allows the Commission to take “aggressive legal action” against companies that violate the DNC Registry through excess unwarranted robocalls or with telemarketing fraud, among others.

The Registry does not apply to political calls, surveys, calls from nonprofits and charities and calls from companies with which consumers have done business in the last 18 months.

Across the nation, just under five million complaints were submitted to the FTC this past fiscal year, rising from 3.9 million last fiscal year. 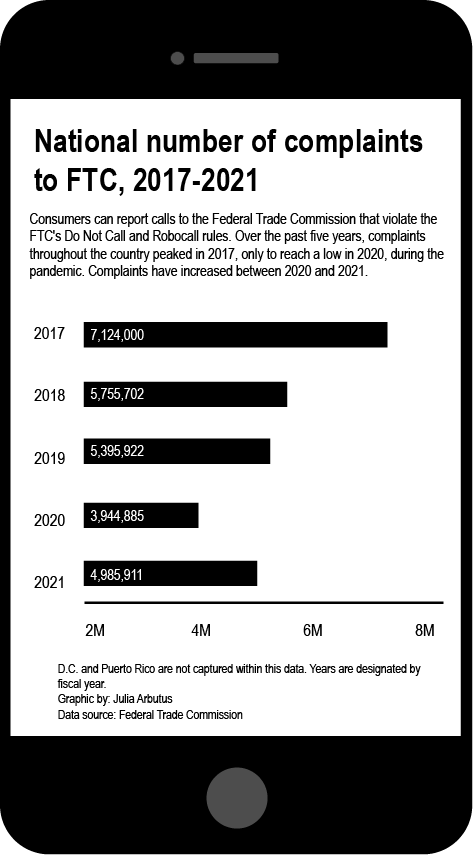 Of all the complaints received from Maryland residents, 69% of the over 122,000 calls described robocalls. Nine percent of complaints did not indicate the call type.

Maryland residents reported the most unwanted calls from imposter government agencies or businesses, which aligns with the national trend. In such calls, imposters falsely pose as government representatives, such as the Social Security Administration or the IRS, according to a FTC press release.

Calls about warranties and protection plans were the second-most commonly reported.

Currently, there are 244 million phone numbers registered with the FTC’s Do Not Call Registry, with three million registered this past fiscal year. Phone users can verify registration or register a phone number here.