WASHINGTON – Emma Campbell, a technician at the National Museum of Heath and Medicine in Silver Spring, Maryland, has been riding Amtrak trains at least twice a year since attending college in 2012.

Half of the Amtrak trains she has taken have been delayed anywhere from 15 minutes to four hours, she told Capital News Service.

Amtrak hopes to change those negative experiences with a historic influx of $66 billion in funding through President Joe Biden’s $1.2 trillion infrastructure bill. The funding will go towards reducing maintenance backlogs, improving tracks and signals, replacing nearly 50-year-old railcars and replacing or overhauling old tunnels and bridges in a massive effort to modernize the nation’s passenger railroad service.

The bill will provide $6 billion in directed grants over five years to projects along the Northeast Corridor, a 457-mile-long route connecting major cities from Washington through Baltimore to Philadelphia, New York and Boston. The corridor is Amtrak’s busiest, serving 6.1 million passengers in fiscal year 2020, which is a decrease of nearly 50% in ridership from Amtrak’s pre-COVID fiscal year 2019 reports.

The delayed replacement of century-old infrastructure has been a burden on Amtrak employees, Amtrak CEO Bill Flynn said in testimony last May before the House Transportation and Infrastructure Committee’s subcommittee on railroads, pipelines, and hazardous materials.

“But the Amtrak and commuter train passengers who use the Northeast Corridor every day also pay the cost, as they endure the unreliability that comes with depending on infrastructure never meant for today’s demands,” Flynn said. 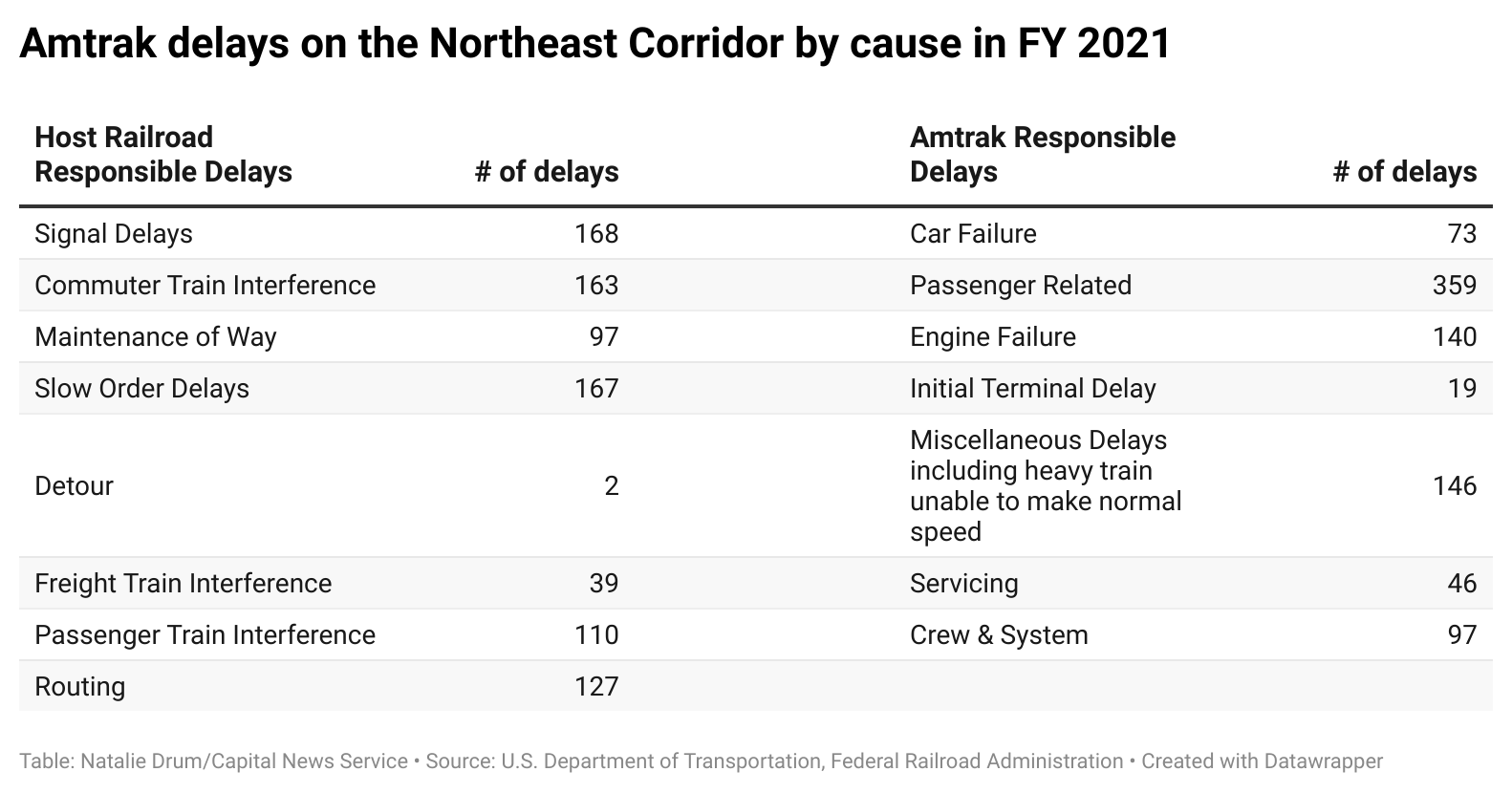 “The greatest threat to the future of our long distance network is not COVID-19, but rather poor on-time performance that diminishes the value of these services to our customers and ossified routes that cannot be changed or expanded because of host railroad resistance,” Flynn said in October testimony before the Senate Commerce, Science, and Transportation Committee.

Federal law requires passenger trains be given priority over freight trains. However, the Department of Justice has enforced that law just once and that was 40 years ago, according to Amtrak.

“They claim passenger rail in America has the right of way and it’s a lie,” Campbell said. “You wouldn’t believe how many times I’ve been told ‘the train cannot move because there’s freight ahead of us.’”

Interference by freight trains has accounted for about 60 percent of Amtrak’s delays systemwide in recent years. Those delays are a major factor in Amtrak’s operating losses, according to a 2019 report by Amtrak’s Office of Inspector General. In fiscal 2018, the passenger railroad lost $171 million.

(Amtrak said it was close to erasing its losses by fiscal 2020, but the COVID-19 pandemic nearly erased ridership for a time, resulting in an operating loss of $801 million.)

However, freight interference is nowhere near the leading cause of delays in the Northeast Corridor, because Amtrak owns the tracks in that region. But that constitutes most of the 3% of track Amtrak owns across the 21,400 route-miles its trains use, according to Amtrak’s Host Railroad 2020 report card.

Passenger-related delays such as delays related to disabled passengers, wheelchair lifts, large groups, etc., were the chief cause of the 880 delays on the Northeast Corridor that Amtrak was responsible for in fiscal year 2021 third quarter. And, of the 873 host railroad responsible delays, only 39 were caused by freight train interference. 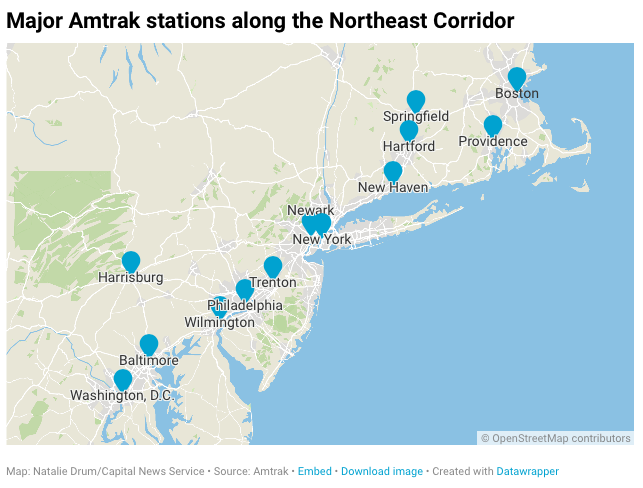 Most of the remaining tracks throughout the country are owned by freight rail companies such as CSX, which make all the train dispatching decisions, including what trains have priority over others. The Capitol Limited route from Washington to Pittsburgh is the only route located in Maryland that is owned by CSX.

Systemwide, according to the Amtrak report card, “freight trains caused 700,000 minutes of delay to Amtrak passengers in 2020 – that’s equivalent to more than a year of passengers waiting for freight to go first.”

The only other two sections of the Northeast Corridor that are not owned by either CSX or Amtrak are the 46-miles between New Rochelle, N.Y., and New Haven, Conn., owned by Connecticut Department of Transportation and 38 miles between the Massachusetts-Rhode Island border and Boston, which is owned by Massachusetts but operated and maintained by Amtrak, which shares the track with commuter rail service.

“For Amtrak to implement and offer new services such as adding tracks, the company will have to negotiate with the freight railroads to make provision for those services to be offered,” List said.

Most of the railroads in the United States have a limited amount of track capacity and the railroads do not tend to over-invest in that, List said.

“In that sense if the passenger trains and the freight trains are trying to use those facilities at the same time, it’s a somewhat intricate scheduling problem to figure out how to weave the passenger trains into the movements of the freight trains,” List said. “If there is interest in having the faster services, either provided or increased by investments, more capacity is probably something that needs to happen.”

The boost of funding allocated to the Northeast Corridor will help Maryland, but the state has not been in discussions with CSX about adding track, said Peter Wendolkowski, acting chair of Rail Passengers Maryland, a local affiliate of the national Rail Passengers Association, which is focused on public transportation issues.

“No matter where the funds are coming from, challenges are always faced when it comes to the freight railroads, whether it’s for freight train interference, access to the tracks, or money for certain improvements,” Wendolkowski said.

According to House testimony from Edward Hamberger, president and CEO of the Association of American Railroads, “expanding passenger rail operations over the nation’s freight rail network involves significant opportunities and challenges.”

“The odds that these challenges can be overcome will be higher if certain principles are followed,” he said. In his prepared testimony, Hamberger said: “Passenger rail use of freight rail corridors should not compromise freight railroads’ ability to serve present or future customers.”

“With the Rail Passenger Fairness Act, we can finally hold freight railroads accountable when they fail to follow the law and get Amtrak’s on-time performance back on track,” Durbin said in a statement.

One improvement Amtrak riders won’t be waiting long to see is the replacement of 45-year-old Northeast Regional Amfleet I cars with new rolling stock: 83 Intercity train sets, deployed on routes accounting for almost half of Amtrak’s annual ridership, according to the Department of Transportation.

Campbell said she is most looking forward to Amtrak’s new cars.

“From what I know, most of their trains are still from the 80s, which is why it doesn’t surprise me that things break down,” she said.

One one occasion, Campbell said she remembers being told over the train’s loudspeaker that the auxiliary engine was down. Her train had stopped in the middle of nowhere and it was dark outside, she said.

“None of us were very confident about getting to our destination,” said Campbell, who said she usually finds her Amtrak delays occur because of issues with locomotives.

Amtrak’s new rail sets will be powered by dual-mode diesel-electric locomotives, allowing them to operate on the electrified Northeast Corridor route and then continue to destinations beyond using conventional diesel power, eliminating the need to stop for engine changes, according to Flynn.

Amtrak spokeswoman Beth Toll told CNS that the infrastructure bill will provide federal funding to advance rail projects and initiatives in the Northeast Corridor and across the nation.

Projects set to advance include implementing a plan to make a 15-year investment in 150 projects along the Northeast Corridor, Toll said.

Included in the plan is the replacement of the Amtrak and commuter rail route through the aging Baltimore & Potomac tunnel with a four-track, two-mile long tunnel called the Frederick Douglass Tunnel, that will reduce trip times by permitting speeds up to 100 m.p.h. The old tunnel will be upgraded to permit speedier passage of freight trains from the port.

“The tunnel has become a major bottleneck to the port. Now, the Port of Baltimore will be getting a $125 million grant to upgrade that tunnel so freight trains can come double-stacked through that tunnel,” Biden said during his Nov. 10 visit to Baltimore.

According to Wendolkowski, the Baltimore tunnel fix and Washington’s Union Station expansion will allow for increased MARC service on the Penn line, one of three service lines running between Washington, Baltimore and other Maryland stations.

“Having Baltimore in the mix is really important for Maryland,” he said.

By 2035, improvements are projected to save $140 million annually through commuter and intercity travel time reductions as well as a 33% increase in Amtrak intercity service, according to the Northeast Corridor Commission’s plan.