Washington, D.C. is among the cities leading the development of new multifamily housing units in metropolitan areas across the United States.

The D.C. metro area – which includes the District, parts of suburban Maryland and Northern Virginia – had nearly 40,000 units under construction at the end of 2021 and 220,000 units in the planning and permitting stages at the start of 2022, behind only Austin and Dallas, Texas, according to data from real estate research firm Yardi Matrix.

Since January 2020, the rate of units under construction in the D.C. metropolitan area has remained above the national average. The growth in construction coincides with rising demand for multifamily housing in the area, with around 22,000 units sold from January 2021 to January 2022, according to Yardi Matrix. 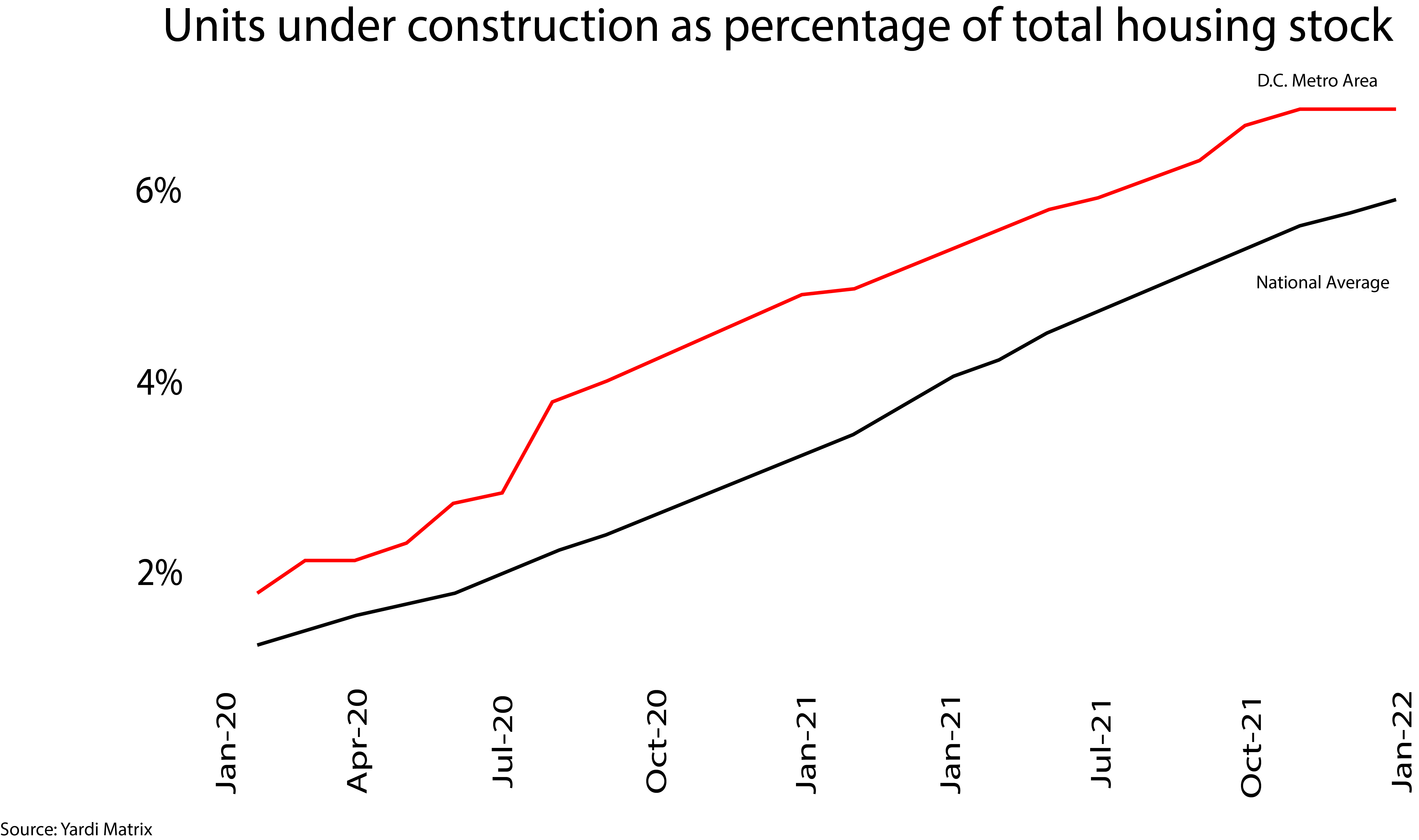 The greater D.C. region also added nearly 125,000 jobs from October 2020 to October 2021, marking a 4.7% growth rate. That figure trails behind the national average of 5.3%, but still indicates a recovery from the loss of jobs throughout the COVID-19 pandemic.

But while the area ranks high among cities building or planning new developments, the rate of delivery in recent years lags behind other metropolitan areas. 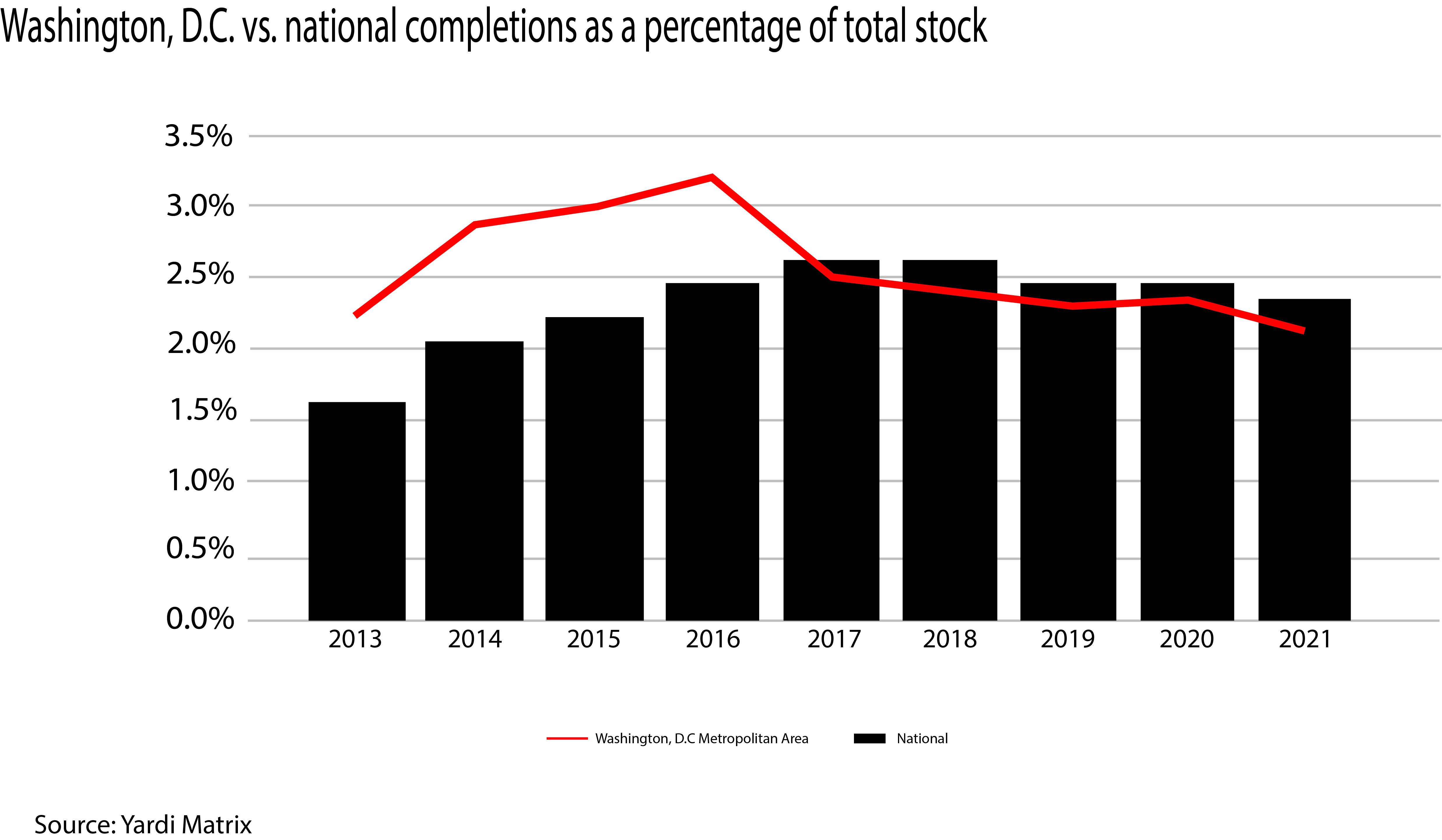 In 2021, a total of 11,922 units came to market in the D.C. metropolitan area, slightly below the area’s five-year average of 12,446 units per year. About half of these units sit within the District, while suburban Maryland and Northern Virginia comprised the other half.

Northern Virginia led rent growth across the metro area as some neighborhoods, such as Ballston and Crystal City, saw nearly 20% increases in rent in 2021. However, D.C. neighborhoods like Penn Quarter, Foggy Bottom and Capitol Hill remained the most expensive neighborhoods in the region.

The Washington Metropolitan Transit Authority (WMATA) is leading a charge to bring new developments outside D.C’s borders, with public-private partnerships designed to place apartments, condos and townhomes on Metro-owned land.

WMATA recently released its Strategic Plan for Joint Development, a 10-year initiative that includes plans for 20 joint development initiatives by 2032, and over 40 developments in the long term. The total number of developments would amount to over 31 million square feet of real estate.

But the onset of new developments – often branded as “luxury-style apartments” – has heightened concerns about gentrification.

Over the past 30 years, the volume of new housing units in the D.C. metro area has shifted from suburban Maryland and Virginia to the District, according to a 2021 report from the Brookings Institute. As a result, the city has experienced some drastic demographic changes since the beginning of the 21st century.

The Black population in D.C. dropped from 60% to less than 50% between 2000 and 2018, according to a research project funded by the National Science Foundation, with certain neighborhoods experiencing the brunt of this shift.

For example, the area near Navy Yard saw a 72% decline in its Black population while the average home value has increased three-fold, according to the report. Meanwhile, the percentage of people with a college degree in this neighborhood increased 80%, and the white population jumped from 3% to 68%.

Other neighborhoods in D.C. have not experienced these same levels of displacement.

Barry Farms, located just south of Navy Yard, has shown far fewer signs of gentrification from 2000 to 2018, according to the NSF report. And on Kennedy Street – located in Northwest D.C. – rising median household incomes and average home values indicate that gentrification is beginning to take hold. 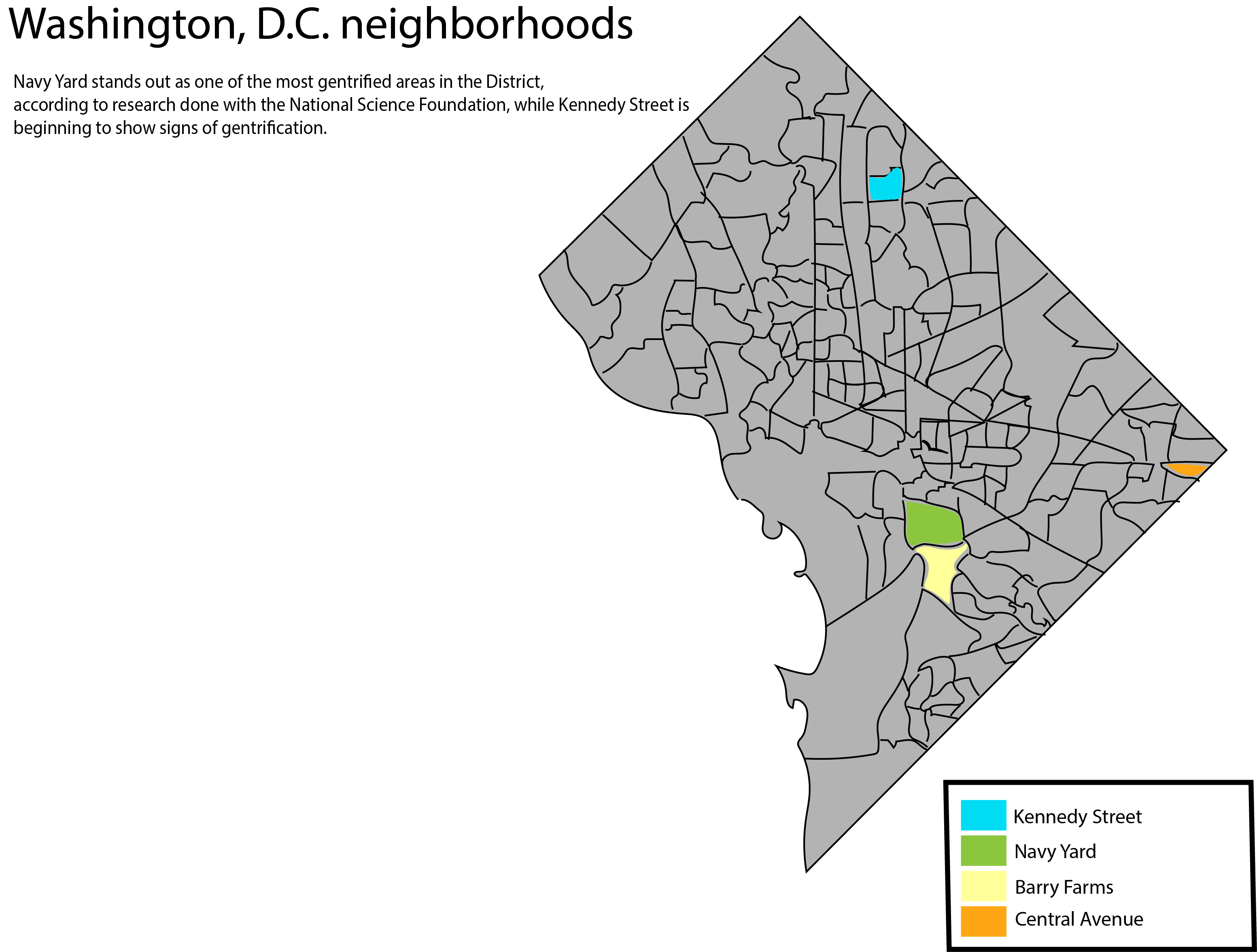