BALTIMORE — Fourteen years ago, Masonville Cove, a small stretch of woods and water along the Patapsco River, just north of Interstate 895 and west of a sprawling industrial complex, held 61,000 tons of trash. Today it’s a sanctuary.

With deer browsing and meandering along the trails in the early morning, woodchucks popping out of their dens to forage in the late afternoon and geese swimming in what once was a notoriously foul, polluted inlet, the area is a success story.

“Masonville Cove is one of Maryland’s great environmental restoration projects,” said William P. Doyle, executive director of the Maryland Port Administration, in a statement. “The Maryland Port Administration led a massive cleanup effort of Masonville Cove years ago and worked closely with neighboring communities and our partners to redevelop the site into all that it offers today,”

Two of the more visible examples of the cove’s success are the pair of bald eagles nesting in its trees and the personalized trash wheel that catches trash before it gets to the river.

Captain Trash Wheel, a large trash collecting mechanism with googly eyes and solar panels that give it the appearance of a hermit crab, was installed in 2018. It has since become the cove’s pseudo mascot. It even has its own dedicated social media presence, with nearly 1,900 Instagram followers and 1,600 followers on Twitter.

The mechanism collects heaps of trash each year from storm drain runoff that empties into the cove from city streets. Since its installation in 2018, the wheel has removed almost 30 tons of trash, according to data from the Maryland Environmental Service.

Then there’s the eagles.

The cove is home to the first pair of nesting bald eagles to return to Baltimore city, according to the U.S. Fish and Wildlife Service.

“I think it’s special, because they were the first documented pair returning back to Baltimore, and I think that’s a sign of the actions we’ve been taking to protect eagles and do a better job of taking care of our waterways,” said Ela-Sita Carpenter, an urban wildlife biologist for the U.S. Fish and Wildlife Service.

Due to pesticides, shooting, trapping and loss of habitat, bald eagles became rare in the lower 48 states during the early 20th Century. They had declined to only 417 breeding pairs in the 1960s and became one of the first animals protected under the Endangered Species Act in 1973.

The birds rebounded dramatically and were removed from the endangered species list in 2007. According to a report from the U.S. Fish and Wildlife Services last year, there were 71,400 nesting pairs in the U.S.

In 2021, the Baltimore pair nested in the cove for the third year in a row after successfully raising four eaglets over the previous two years.

This year the bald eagles returned to the cove but haven’t nested, federal wildlife officials said. They said researchers are unsure why.

To Genevieve LaRouche, Chesapeake Bay Field Office Supervisor with the U.S. Fish and Wildlife Service, the refuge is a monument to the groups who came together to create it.

“I think it tells a really good story about what happens when you let the community have a space like this,” LaRouche said. “I think that’s really important to people and their mental health and physical health.”

In 2008, Masonville Cove was more a headache than a mode of health care.

Back then, it was the Masonville dumping ground, holding over a century of trash that dated as far back as the Great Baltimore Fire of 1904, according to the Maryland Port Authority.

The trash was removed, and in 2009, the Masonville Cove Education Center opened. In 2012, trails in the cove were opened to the public for the first time.

Now, Masonville is home to an array of wildlife.

Carpenter said that since she began tracking animals in the cove in early 2020, a pair of coyotes has been seen roaming the woods, along with deer, raccoons, foxes, opossums and groundhogs.

“Given Masonville’s history, it used to be a dumping site and not that much wildlife was really able to safely use it,” she said, “and now we have bald eagles and coyotes using this area.

“And I think that’s really cool.” 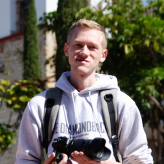 Joe Ryan is a journalist in the Capital News Service Annapolis bureau. He has worked as a photographer and photo editor at The Diamondback, and is a student volunteer with Big Ten Plus. Reach him at jryan1@terpmail.umd.edu and follow him at @Joe_Leo_Ryan.