Pope Francis wows thousands who trekked to Washington for a glimpse
By Darcy Costello  -  September 23, 2015
47 views

WASHINGTON — Jesus Nunez traveled more than 2,000 miles, from Michoacan, Mexico, to Washington, D.C., for a two-minute sighting of Pope Francis.

“I’d love to see him, if possible,” Nunez said before the papal parade Wednesday. “I have faith in him, but I don’t know if I will.”

It’s this faith in Pope Francis, and in what he means to the Catholic community, that propelled Nunez — and thousands of others — to stand to along the papal parade route hours ahead of Pope Francis’ scheduled appearance.

“It’s something inside that I feel, this love for him. I love the way that he is and I’m very proud about it,” Nunez said. “He belongs to the community.”

Pope Francis, the first South American and first Jesuit pope, has carved a unique papacy since his election in 2013: shunning worldly pleasures in favor of modesty, subtly altering aspects of church doctrine and pushing for an open, welcoming Church.

“Pope Francis is a figure of how Christians should be. He’s very forgiving and he compromises in a good way,” said Rut Nastiti, an Arlington, Virginia, resident. “Times are changing and the Church needs to reform its approach to people — Francis is doing that, he’s welcoming everyone.”

Wednesday, Francis met with President Barack Obama at the White House and attended a welcoming ceremony in honor of his first visit to the United States. Following the presidential meeting, he traveled in a Jeep Wrangler popemobile between the Ellipse and along a portion of the National Mall in a papal parade complete with children, flowers and papal blessings.

Afterward, he made his way to the Cathedral of St. Matthew the Apostle for a midday prayer with roughly 300 U.S. bishops and, later, celebrated his first Mass in the United States, a canonization at the Basilica of the National Shrine of the Immaculate Conception.

Michael Chavez, who is studying to be a priest at Redemptoris Mater, traveled with a group of fellow seminarians from Kearny, New Jersey, to welcome the pope to the United States. Francis, Chavez said, is doing things that previous popes haven’t done.

“He sort of goes against what you’d expect of a pope. He’s not on a pedestal, he’s a bit more with the people,” Chavez said. “He’s very humble, very meek.”

In a speech at the White House on Wednesday, the pontiff emphasized climate change, responsibilities toward migrants and the importance of combating global poverty. Later, addressing the U.S. bishops, he urged that the American clergy grow closer to the people they serve and open their arms to immigrants.

The papal parade route, to Chris McCorkle, was a chance to expose her 13-month-old son, Mason, to a culture of “shared beliefs and shared faith,” she said. Plus, it was a “once-in-a-lifetime” opportunity to show her respect to Francis, whom she described as both kind and realistic.
“He’s helping the Church to adjust to a modern world and the concerns of the day,” the Alexandria, Virginia, resident said. “How could we not come when he’s in town?”

A resident of Tampa, Florida, Reina spent the night in Charlottesville, Virginia, and woke up at 2 a.m. to travel to Constitution Avenue. After missing Pope John Paul II in his U.S. visit, she said there was no way she’d miss catching a glimpse of Francis this time around.

“Seeing him in person — it’s hope,” Reina said. “It’s God showing us that he’s thinking about us and looking after us. He’s truly spreading God’s message.” 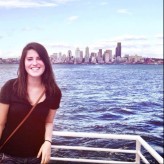 Darcy Costello is a beat reporter in the Capital News Service Annapolis bureau covering government contracts, the Maryland State Board of Public Works and women’s issues. Previously, she worked as a features intern at The Baltimore Sun, reporting intern at The Carroll County Times and editorial intern at USA Today. Connect with her on Twitter or LinkedIn.