WASHINGTON – Just three years ago, the words “oriental” and “negro” were removed from federal laws and regulations, after a bill to ban the offensive words unanimously passed Congress.

Rep. Hakeem Jeffries, D-New York, pushed the legislation through, under the premise that words matter, and can cause harm and division.

Another attempt to change the federal government’s vocabulary is underway, but unlike its predecessor in 2016, the bill seems far less likely to fly through Congress.

The term proposed for the chopping block is “illegal alien,” under legislation sponsored by Rep. Joaquin Castro, D-Texas.

The phrase refers to noncitizens who are in the country without proper authorization, and fell mostly out of use with politicians until last year, when President Donald Trump amped up his use of the term to refer to all unauthorized immigrants.

The word cloud below highlights which words Trump most frequently says around his use of the word “alien,” based on an analysis by Capital News Service. 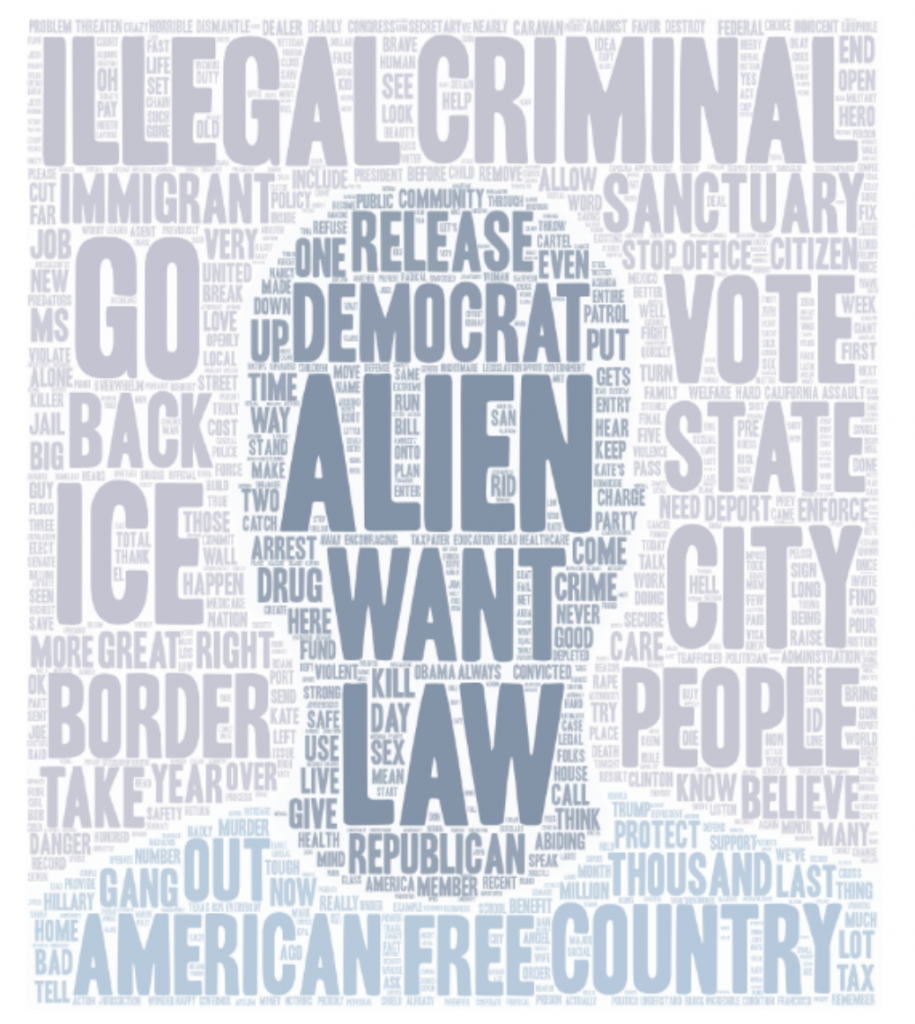 But last year, the president’s use of the term skyrocketed to a whopping 123 times in tweets, speeches and political rallies, a CNS analysis shows. He’s used it 58 times this year.

And Google searches for the term have also seen spikes.

Otto Santa Ana, professor of linguistics at UCLA, said “illegal alien” is used intentionally by the president to strike fear into the hearts of Americans and push his immigration agenda. It demonizes immigrant communities, he said, and tries to make a powerful nation fear the powerless.

When we use ‘illegal aliens’ to refer to immigrants, we place them in a different category than ourselves, Santa Ana said. “They are no longer people that need to be considered the way we would consider Tom and Mary Jones from Orange County, California. It’s easy to conceptualize them as a horror, as dangerous, as inferior, as someone who will destroy the fabric of American society.”

It’s why Castro introduced the legislation, which would change any reference to “illegal alien” or “alien” in any federal statute, rule, regulation, executive order, publication or any other federal document to “foreign national” or “undocumented foreign national.”

“Words matter,” Castro said in a statement about the Correcting Hurtful and Alienating Names in Government Expression (CHANGE) Act. “The words ‘alien’ and ‘illegal alien’ work to demonize and dehumanize the migrant community. They should have no place in our government’s description of human beings.”

But opponents of the change say using new “feel-good terms” like “unauthorized” or “undocumented” immigrant push an open borders agenda and create the false impression that an immigrant’s undocumented status is the U.S. government’s fault, for perhaps taking too long to authorize them, or making an administrative error in their paperwork.

“The immigration process isn’t like applying for a municipal parking permit or a library card – it is much more complex,” Matt O’Brien, of the Federation for American Immigration Reform (FAIR), told Capital News Service in an email.

“And it is a complicated process because it involves vetting people from all over the world in order to determine whether they present a threat to the economy, public safety and national security of the United States,” O’Brien said.

FAIR said “alien” has been used for hundreds of years as a neutral term to describe someone who is a foreigner.

Just last month, New York City’s Commission on Human Rights issued guidance banning the use of “illegal alien” or “illegals” when the terms are meant to “demean, humiliate or harass a person.” Discrimination on the basis of immigration status and national origin has been illegal for decades, but the commission said that with 37% of New York’s population being born outside of the United States, the directive ensures immigrant communities are protected against discrimination.

Violation of the law, which covers workplace harassment, tenants’ rights and public accommodation, can result in a fine of up to $250,000.

In April 2013, the Associated Press revised its guidelines to abandon “alien” and “illegal alien” in news stories and instead encouraged journalists to specify how someone entered the country and from where.

For example, an unauthorized immigrant may have been brought to the United States against their will, such as a victim of sex trafficking. Some might have come under “temporary protected status” because of turmoil in their home country, and the government later removed their protected status. And it’s estimated that about half of unauthorized immigrants in the U.S. came here legally, but overstayed their visas.

“The term is a problem because you would think if someone is an illegal alien, that means they are all in the same boat,” Shahid Haque, an immigration lawyer in Montana, said, adding that “illegal alien” is overly simplistic and legally inaccurate. He also said the word can do a lot of harm in the way immigrants are treated.

“It allows characterization of a large group of people to be less entitled to compassion or dignity,” Haque said. “It allows people to dehumanize the immigrants themselves and cast their entire existence as illegal.”

“The broader the term is used, the more it’s meant to demonize immigrants and portray them as criminals,” he said.

Most immigrants aren’t criminals. Because crossing the border without authorization is a misdemeanor, but overstaying a visa is a civil infraction, a migrant’s unauthorized presence in the United States is not a criminal offense.

And the notion that immigrants are dangerous has been dashed by several studies showing both legal and illegal immigration does not lead to rising crime. While 6% of U.S. citizens are felons, only 2% of immigrants are felons.

But “criminal aliens” is an even more frequent phrase in Trump’s vocabulary than “illegal aliens.”

Obviously, the Castro bill cannot correct the president’s vocabulary – it would simply eliminate references to aliens from federal documents.

Critics insist that effort is wrong and misplaced.

“If certain members of our legislature dislike our immigration laws, they should propose meaningful changes,” O’Brien said.

“But putting forward silly legislation that proscribes the use of standard legal terminology is pointless and shows a stunning lack of willingness to engage in serious debate aimed at formulating wise immigration policies.” he said.

Still, language matters to supporters of the bill.

“What you see is what you get,” Santa Ana said. “We construct our world in terms of the way we label things.”