In July 2019, interest in the term “Mercury retrograde” reached a peak, according to data from Google trends. Yet, despite the many memes and even products made in response to the term, few people seem to know what Mercury retrograde actually means.

If you’re reading this, you’ve nearly survived the first Mercury retrograde of this year. The planetary transit began on Feb. 16 and will end on March 9. According to astrologers, this time period should be marked by issues regarding communication, technology and travel. Did you feel the difference?

Here are some symptoms you may have experienced, according to astrology website theastrocodex.com:

As Mercury rules the intellect, communication and many other issues and situations linked to these matters, they are functioning differently than usual with Mercury retrograde. Information, even if sent correctly, is misinterpreted or does not arrive. Perception changes and mistakes concerning data are more frequently done. This affects speaking, sales, contract signing, negotiating, traveling and everything connected to transfers, primarily of data.

If you’re more curious about the science behind this transit than its supposed mystical qualities, there’s also a practical, astronomical explanation.

Though the internet has a keen focus on the topic of Mercury’s retrograde period, all planets experience retrograde motion. When a planet passes Earth in orbit, an optical illusion is created. From the Earth’s line of sight, the planet will momentarily appear to move backward in the sky. See the motion graphic above for an illustration of this concept.

It’s not unlike an illusion you might experience in day-to-day life. For example, if you’re sitting in a parked car and the car next to you begins to back out, you may momentarily think you’re rolling forward.

This occurrence is not particularly important in astronomy, Professor Melissa Hayes-Gehrke, a specialist in observational astronomy at the University of Maryland’s Department of Astronomy explained. “It was something that mystified ancient astronomers, but once they realized that all planets orbited the Sun, they could explain it.”

And though we can clearly see the transit happening, there is no scientific evidence to support that we should feel it, too. “There’s really a huge amount of space between all of the planets and so they can’t really affect each other in terms of going forward or back, it’s not like there’s air resistance or wind,” said Hayes-Gehrke.

There will be two more Mercury retrogrades this year, from June 18 to July 12 and Oct. 13 to Nov. 3. But don’t take these planetary passings too seriously. According to the University of Maryland astronomer, “If people like astrology for fun, who cares, but I hope no one is making serious decisions from it.”

Thanks to Vox.com for inspiration for this story and motion graphic 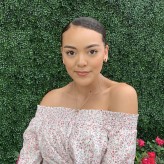