Dillion Hopson Allen still remembers the first time Rosa stayed with him and his parents for short-term care. The house was packed with kids running around, laughing, screaming and playing.

Rosa, however, was lying down on the floor. Wrapped in a plush blanket, the teenager looked peaceful, but alert – as if she were feeling the room a little bit before breaking out of her shell, Dillion said.

Now as the Brown’s foster child two years later, Rosa has more spunk. She is a high-school age, sweet and lively girl who loves dresses (the pink one is her favorite).

She is also about to be adopted by Dillion, who is 23, and his mother and stepfather, Zina and Michael Brown. Adding their last names to Rosa’s is important to them. Having the courts honoring the kinship matters, Dillion said. But because of the pandemic, the process is taking longer than usual.

Capital News Service is not disclosing Rosa’s real name to protect her identity and privacy. She was not interviewed because she is a minor.

Before the pandemic, the process of adopting a child took six to nine months. But now, it may take up to a year, according to Stephanie King, program manager for the Kennedy Krieger Institute’s therapeutic foster program in Baltimore.

Slower judicial proceedings are just one of the impacts of the coronavirus pandemic on the foster care system, King said.

It was in the middle of last summer, when Maryland had surpassed 45,000 COVID-19 cases, that the Browns decided they wanted to adopt Rosa, who was by then their foster child. They were on their back deck, with Rosa’s social worker — all wearing masks and social distancing.

There was a lot of discussion involved, Dillion recalled. His parents are in their 50s. At some point, Rosa, who has autism and epilepsy, will have to move in with Dillion.

So he wouldn’t just be her brother; he would be a parent, too. But their hearts are set on it. Rosa already feels like part of their family.

While Dillion, Zina and Michael started the adoption process in July, they didn’t sign the paperwork until Oct. 12, when they sent a letter signaling their interest in adopting Rosa to the Baltimore City Department of Social Services. They had their first court session on Zoom on Jan 15.

Amid the pandemic and the start of the adoption process, the Browns hosted five other children. Some stayed with them for one week. Others stayed longer, up to four months. Dillion would give them nicknames based on their personalities, he said.

Two high-energy, elementary school boys stayed with the Browns in the fall. It was a lot to walk them and Rosa through online schooling.

Zina often took the schooling duties because Michael was a lead worker for Johns Hopkins Health System while Dillion had his own online classes to attend at the University of Maryland, Baltimore County.

Zina arranged the three laptops, running three different instructions, in the dining area. She made three partitions, forming mini desks, one for each of the children.

“It was like a marathon,” Dillion said. “She might as well have a teacher status herself, because she was definitely running around like she was in the classroom.”

But with time, it got easier, Dillion said.

When December came, it was just the Browns, Dillion and Rosa again. They were set to receive another child, who was supposed to stay with them for a week.

The day after Christmas, Michael started to feel muscle aches and realized he had a reduced sense of taste. So, Michael and Zina decided to get tested.

The same day Zina tested positive, another child arrived and roomed with Rosa. Michael moved to the guest room. A couple of days later, he also tested positive.

For the next two weeks, Dillion, a pre-med student at UMBC, took the lead taking care of the household.

When Rosa finally realized that Zina and Michael were sick, she would ask Dillion multiple times a day — are they okay?

And then, on the last day of Zina and Michael’s quarantine, Dillion came to a somber realization that he couldn’t taste.

The next day, he tested positive.

In total, the Browns, Rosa and the second child were in quarantine for a month. But neither of the children contracted COVID-19.

“It was just a strange ordeal,” Dillion said.

The last day of quarantine was a special date. It was Zina’s birthday and the first online court date for Rosa’s adoption.

At 10 a.m., Zina and Rosa sat at the dinner table, their laptop in front of them. Zina was wearing a shirt that said, “it’s my birthday.” Rosa was dressed up too, wearing a flowing dress, necklace and earrings.

Zina had thought about becoming a foster parent since her early teen years. Her mother, who worked with special education students, would often bring children to their home.

“I always wanted to help,” Zina said. “I just wanted to be able to make a difference in a child’s life.”

Michael, on the other hand, initially wasn’t as confident. He tends to overthink things, he said, stressing about what could go wrong. At first, when Rosa would call him “dad,” Michael would correct her.

Until one day, he told her – okay, you can call me dad.

“She’s part of my heart now,” He said. “She’s like the daughter I never had… she was placed here for a reason.”

Right now, the adoption process is set to be finalized in May, 10 months after the Browns started.

As for Rosa, she has gotten a new teacher, whom she really likes. When she is not tuned into her online classes, she is dancing or making necklaces. Rosa puts them together in bright, happy colors and gives them to her family.

Once the public health crisis is over, the family is going to throw a big party celebrating the adoption, the Browns said. And while right now that’s still a bit in the air, one thing is for certain.

Rosa will have both Zina and Michael Brown’s and Dillion’s last name — Rosa Hopson Brown.

While Dillion sees why people may view Rosa’s adoption as a big decision, he says it really isn’t. Any sense of burden or fear of what the future holds are outweighed by one simple fact.

Rosa is his sister, he said. 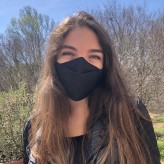